Fun fact:  Astana is the second coldest capital in the world.  And it's been a bit chilly in Astana lately.  Most of last week, the temperatures were above zero fahrenheit, but they plunged starting on Friday.  I didn't have to be anywhere Friday through Sunday, so I stayed inside like a wimp.  I had to go to work starting on Monday, though, so I eventually had to brave the weather.  As long as it isn't too windy, I've found that I can layer enough clothing to make the walk to work bearable, if not exactly enjoyable.  Wind changes everything.  Anyway, as a sample, this is what I wore today:

Even with the gloves, my hands were kind of cold on the way in today, so I may swap the thick gloves out for thick mittens the next time it gets this cold (the powers that be claim that it will be slightly warmer tomorrow).  I wouldn't say my ensemble would win any points for style (or even for allowing people to easily recognize me with my hair and most of my face covered), but it's enabled me to get my wimpy, native North Carolinian self between my apartment and my office with a minimum of pain.  At a certain point in the winter, that might be all I can really ask.
Posted by Hannah at 5:45 AM No comments:

Email ThisBlogThis!Share to TwitterShare to FacebookShare to Pinterest
Labels: Kazakhstan

I think every country has seasonal limitations on what sort of produce can be bought.  I always get a kick out of seeing fresh cherries in the winter in the US for $9+ per pound, and wondering who is actually buying them.  Kazakhstan may have more seasonal limitations than many other places, although I've been told that the situation is improving rapidly.  There have been some pleasant surprises.  I don't know where the fresh apples and pears we've been buying are coming from, but they have actually been pretty good.  Other surprises have been somewhat less pleasant.  Know how everyone complains about the "fresh" tomatoes that are available in the winter in the US?  The ones I've had here are even crunchier.  And good canned tomatoes seem not to be as readily available, at least in the places where I've looked for them.

We decided to have a few people over for dinner last night, and I wanted to plan a menu that made use of what was readily available, without having to chase down difficult-to-find ingredients, or risk serving people something like icky crunchy tomatoes.  This is what we had:

I'll be interested to see when new produce starts coming into season...
Posted by Hannah at 1:10 AM No comments:

Visiting and living in other countries is often great.  Actually getting from your home country to whichever country you're trying to visit is usually another story.  We are back in Astana now.  On the positive side, our trip was safe, delays were minimal, and three of our four checked bags came through with us (we received the fourth one yesterday, I'm happy to say.  It had our peanut butter supplies for the next several months!).  On the negative side, I saw multiple opportunities for improvement throughout.  So, without further ado, here are my unsolicited (and probably unwanted) ideas for how our most recent international trip could have been improved:

TSA Employee:  The fact that your job description includes passenger pat-downs does not give you license to be as creepy as possible in the process.  If you really feel the need to reach inside the front waistband of my pants, it would be professional to advise me of such beforehand.  Also, I'm pretty sure your job description does not include poking my bare abdomen with your fingertips.  I have been through quite a few airport pat-downs, and while they are never enjoyable, they rarely leave me thinking that they would be considered assault in any other context.

JFK Airport:  Why is the airport set up so that if I have to change terminals, I have to actually exit the airport and go through TSA security again?  People who have the misfortune of a layover at JFK are suffering enough already, and if we have already been through security (particularly at another US airport), why should we have to go through again?  I missed a flight out of JFK years ago, partly because of needing to go through security again after switching terminals.  How much time and manpower is wasted there screening passengers who were already screened at their airport of origin?  And just think--if I hadn't had to go through security at JFK on this trip (having already gone through it at RDU), I wouldn't have had to write the paragraph above about appropriate behavior during a pat-down!

Etihad Airways:  When one of your employees notices a passenger who is so drunk that he falls down during boarding, the proper response is to remove him/her from the line and not allow him/her to fly.  After all, someone that intoxicated could quite possibly pose a security threat, particularly on a lengthy flight that crosses the Atlantic Ocean.  Here is an example of an improper response to the situation:


Surprise, surprise, the drunk next to us requested a Heineken beer the first time the flight attendant came around.  Scott and I had to tell her that he was not supposed to have any alcohol.  Fortunately, he did not become belligerent, but what if he had?  Oh, and he managed to snag a cup of wine later on in the flight, so Etihad is obviously extremely lax in enforcing its own inadequate rules.

Prospective Drunk Passengers:  There will almost certainly be plenty of booze wherever you're going.  Why not wait to liquor up until you're in a situation where people can get away from you, rather than having to smell your beer breath at close range for hours on end?  Better yet, you could cut down on your drinking, but I realize I may be asking too much here.

Maybe this trip just served to make me happy that I probably won't be making a long trip again in a while...
Posted by Hannah at 8:01 PM 4 comments:

Email ThisBlogThis!Share to TwitterShare to FacebookShare to Pinterest
Labels: rants

One thing we did in New York was take a tour of the United Nations.  This had been on my mental list of things to do for years, so it was great to actually have a chance to do it.  We were staying in a hotel that was a fairly comfortable walking distance from the UN, and had a free morning, so decided to go for it.

We had to show up 30 minutes prior to the start of the tour to go through security.  After that, we were given stickers that seemed to be color coded by scheduled tour time, and we waited in an enclosed space for our guide.  Our tour group was quite international.  There were other Americans from different states, people from Germany, and people from Nepal.  Our guide was from Japan.

We had to walk a little outside first, which gave us a chance to admire a couple of statues. 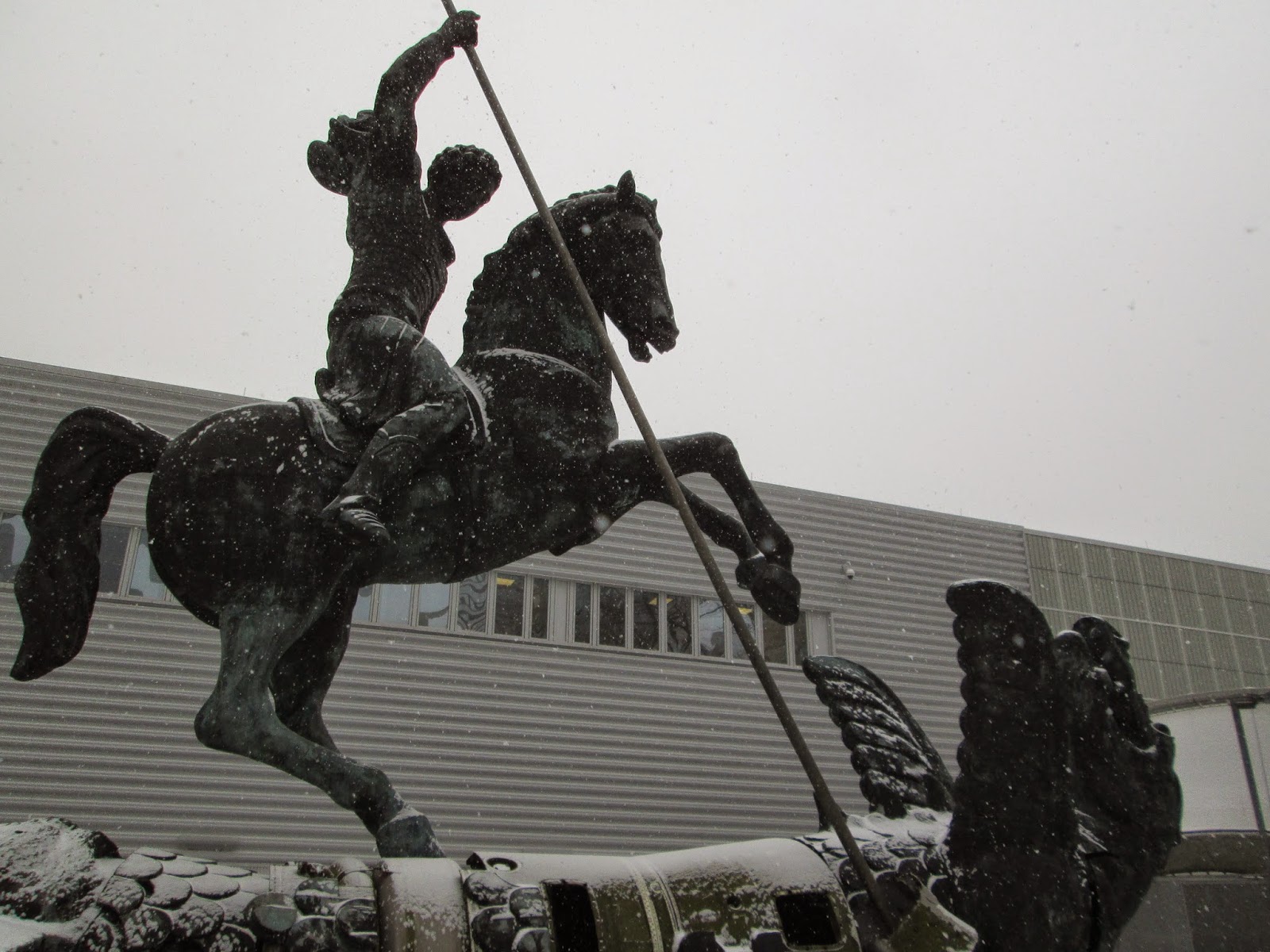 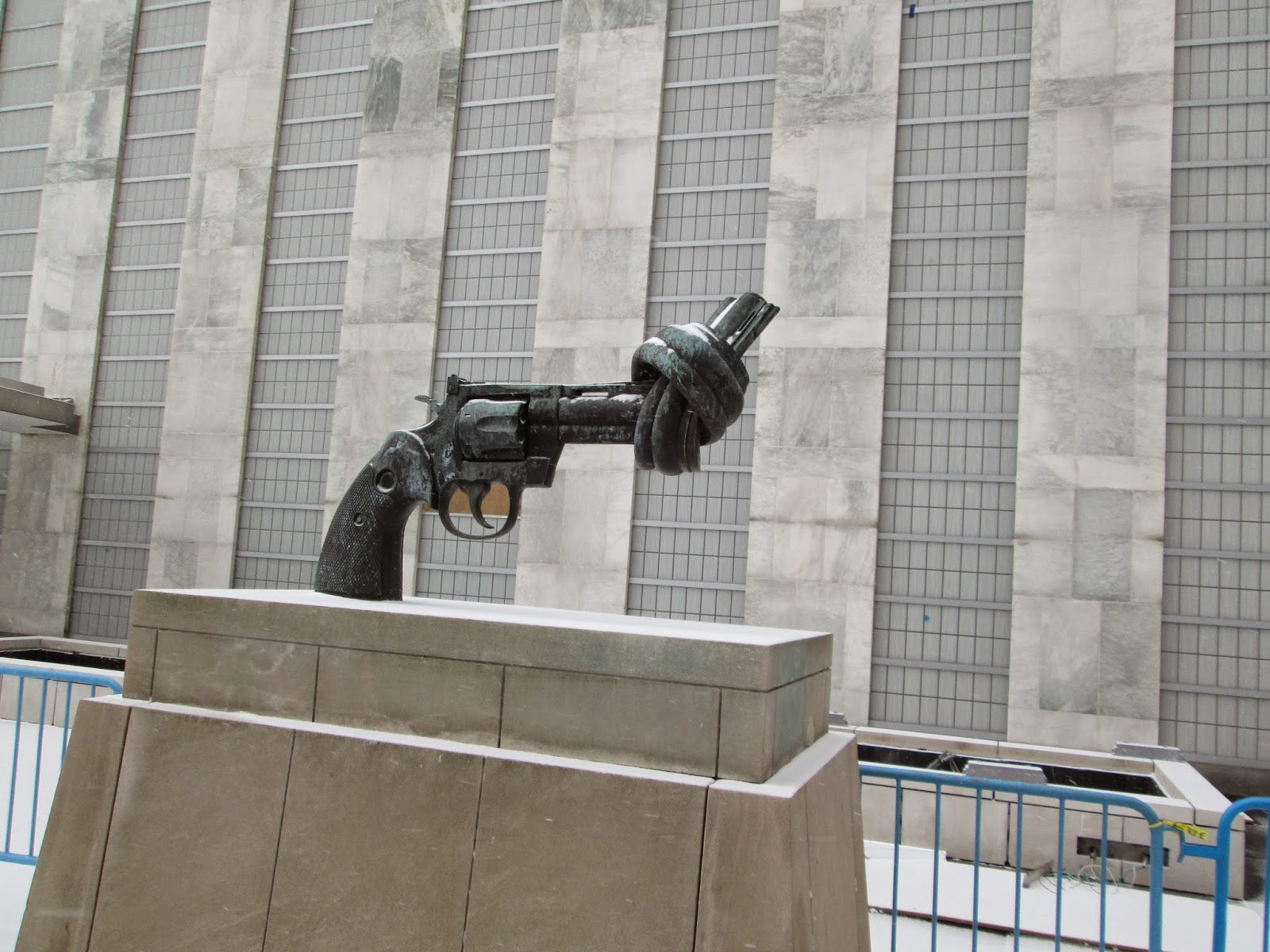 When we went inside, one of the first things we saw was a series of Persian carpet portraits of all the secretaries general!  The most recent three are pictured below.  I was amazed by the detail. 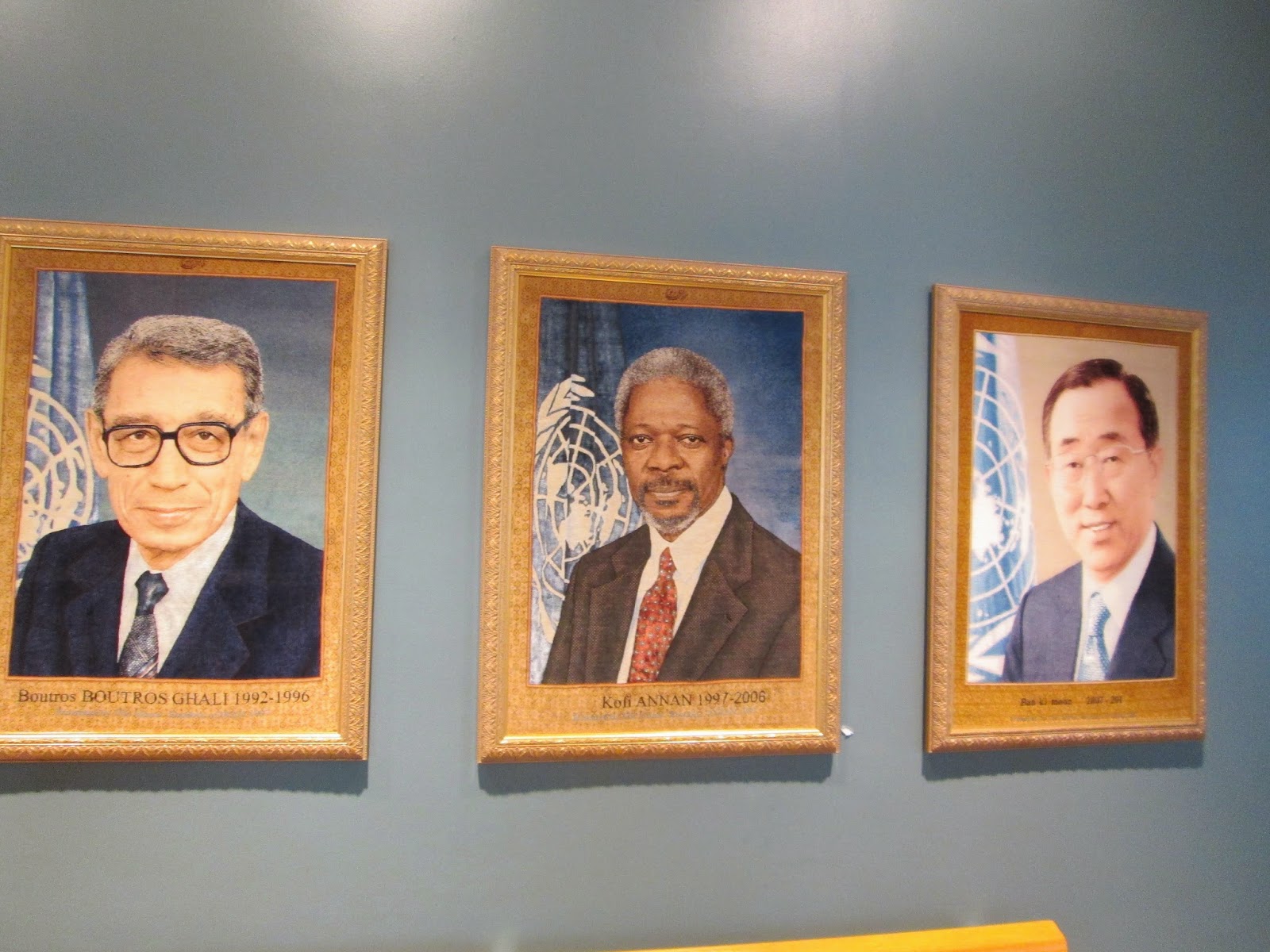 We were unable to see the General Assembly, as it was under renovation when we took the tour.  However, we did get to see the Economic and Social Council, the Trusteeship Council, and the Security Council.  The Economic and Social Council was first.  The guide told us that the partially finished ceiling symbolizes the ongoing nature of development.

I was fascinated to see where people could plug in earphones to hear a simultaneous translation in one of the official languages (Arabic, English, French, Russian, Spanish, and Mandarin Chinese). 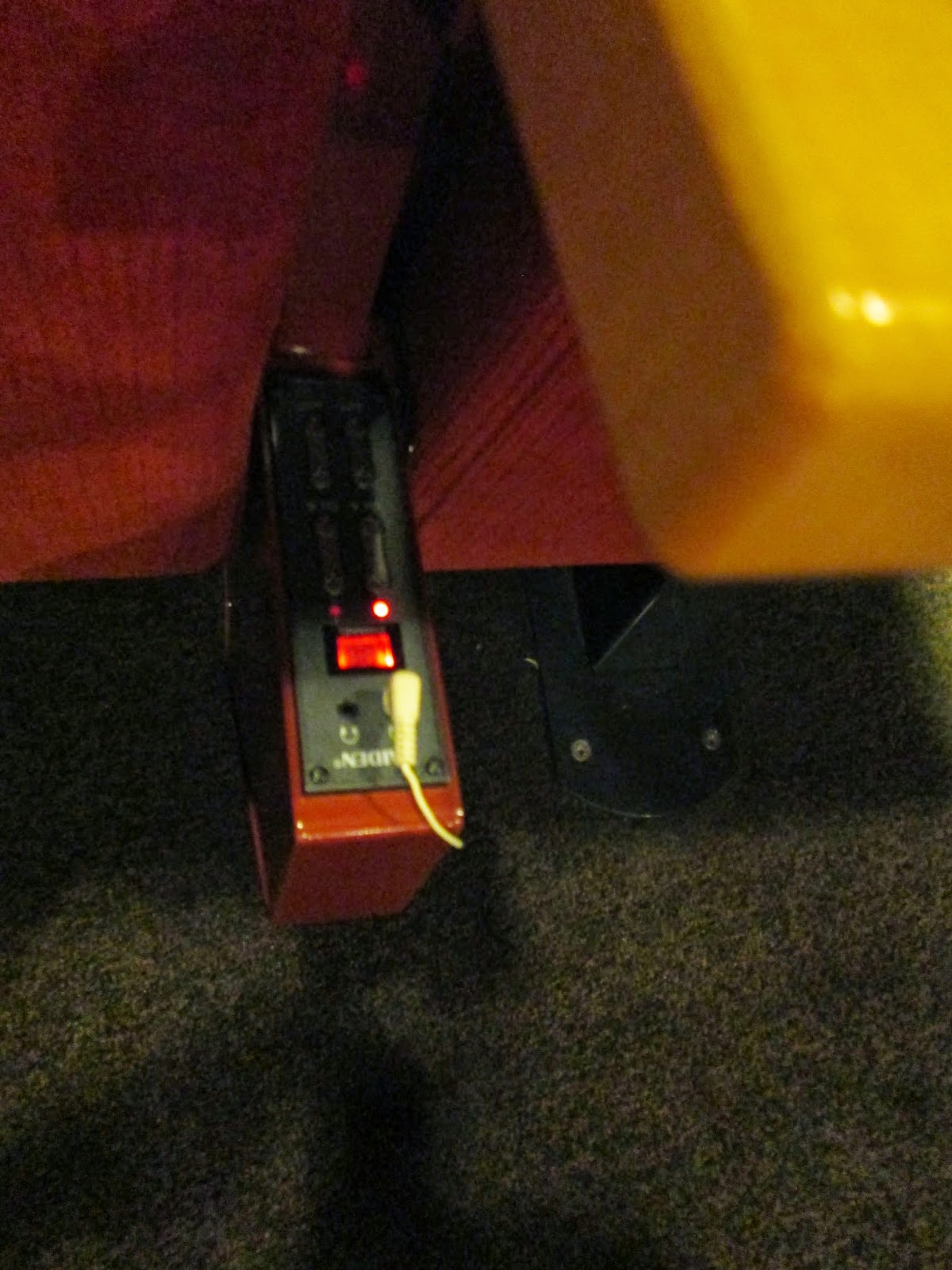 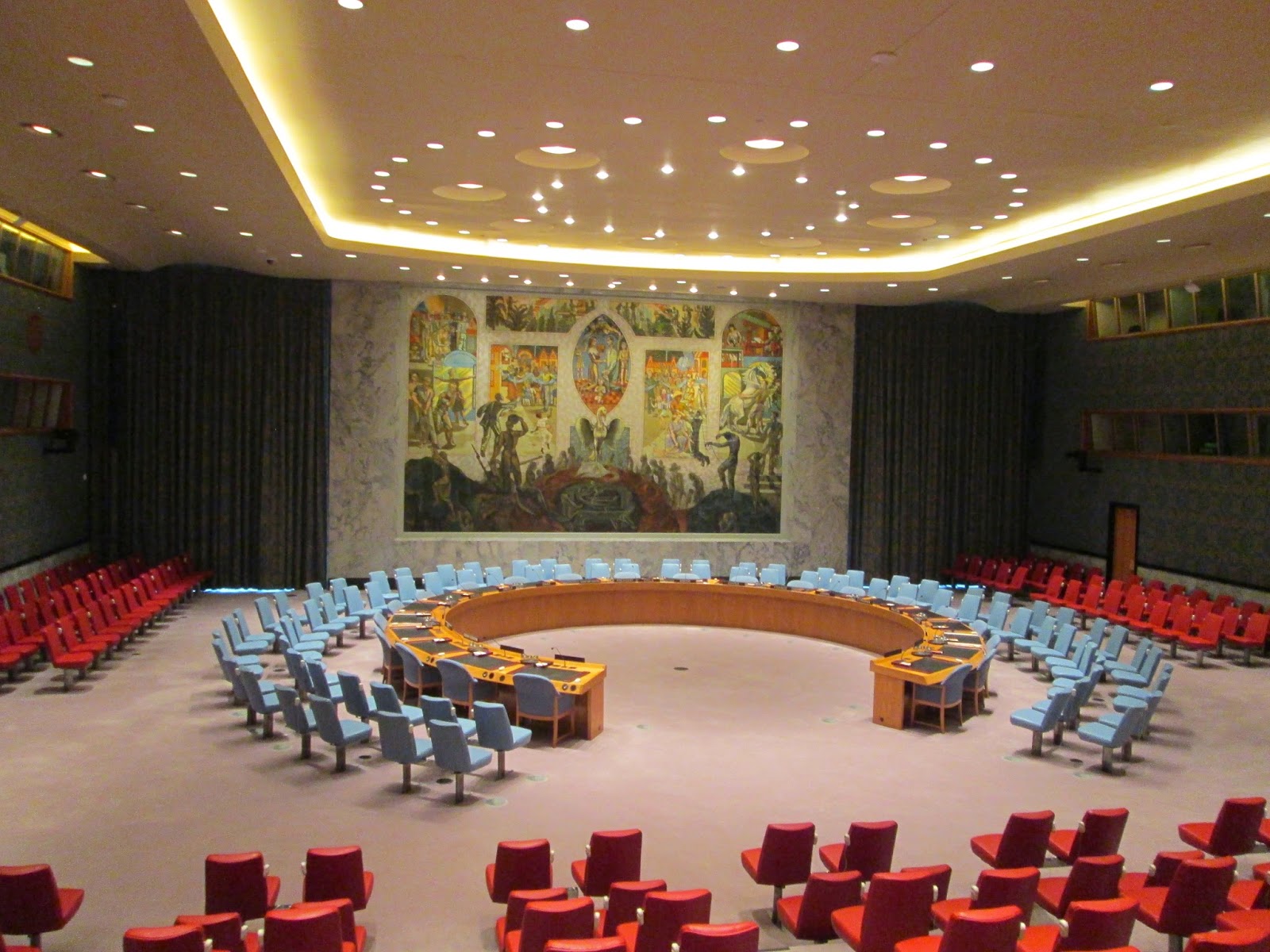 We also saw exhibits including artwork, pictures from the UN peacekeeping missions, and artifacts from Hiroshima and Nagasaki.  The last picture shows the UN from the outside.  Flags for all the member states span for several blocks, but none were flying on the day we visited because it was snowing.  Got to love that winter weather!

Email ThisBlogThis!Share to TwitterShare to FacebookShare to Pinterest
Labels: US travels

Bought new umbrella
Walked in and out of subway
Puddles abounded

Umbrella too small
Soggy clothing and jammies
Pay for cab next time
Posted by Hannah at 7:55 AM No comments:

Email ThisBlogThis!Share to TwitterShare to FacebookShare to Pinterest
Labels: US travels

We're heading off to New York for the last stretch of our holiday soon, so here are some pictures from North Carolina.  I am not posting pictures of any human relatives or friends out of desire to protect the innocent.  :)  We spent time in my hometown and made a trip to the NC coast with my parents.