I Thought Only Human Children Objected To The Concept Of Bedtime 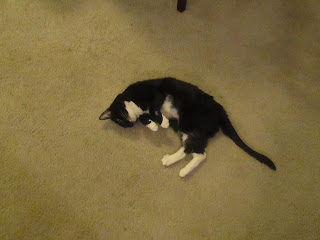 Cute cats are way more fun than politics, especially these days.  Besides, Laila has a proud grandma (catma?) who requested more posts about her.

When we first brought Laila home, we didn't let her in our bedroom.  Scott is allergic to cats, so we wanted to maintain a relatively allergen-free area of the apartment.  Fortunately, though, Scott has not been having as many problems with allergies as we had feared.  Also, Laila had been meowing loudly at night, and we thought she might be calmer and quieter if we let her into the bedroom at night.  We tried this a couple nights last week.

The first night, she was very excited to explore.  She walked all around the room, sniffed everything, then got up on the bed and stomped around for a while.  Then she decided to leave only to sit outside the bedroom door and meow loudly.  We decided that she must have misunderstood the tacit agreement that bedroom access = no loud meowing.  We closed the door for the rest of the night.

We decided to try again the next night.  Big mistake.  The most restful part of the night for me was when Laila was crowding me on my side of the bed and hitting me with her tail.  The rest of the night was punctuated by loud meows at fairly close range.

As I stumbled around the next morning, a theory came to me:  Laila had spent the night hunting and wanted to let us know.  I found a catnip mouse from the living room on the floor of our bedroom, and one of Scott's socks from the laundry basket in our bedroom had somehow made its way to the living room.

Laila, of course, was feeling perfectly refreshed in the morning, and wanted to further refine her hunting skills by playing fetch with me.  When she got tired, she curled up by the living room window.  No time like early morning for a good nap!

Unfortunately, we have had to ban Laila from the bedroom at night once again.  We have also started using a white noise machine, which we purchased years ago to drown out noisy human neighbors.  We've also tried to be more conscious of her routine.  We try to make sure she gets exercise when we get home from work, somewhat like the parents of young children taking their kids to the park to wear them out before bed.  Later in the evening, before human bedtime, we make sure to have some quiet petting time with her.  We've also started leaving a light on in the living room so that our apartment looks less like a spooky hunting ground for cats.  This is sort of working...some of the time.  It's just too bad that most of us humans don't have so much freedom to nap during the day.
Posted by Hannah at 7:02 PM No comments:

Where Do We Go From Here?

I won't lie.  It's been a rough past couple of days for me.  I spent most of yesterday trying not to cry.  I am politically terrified in a way I have never been before.

This isn't just about party lines, either.  I am a lifelong Democrat because my beliefs generally align with the party's platform.  But while I wouldn't have relished the idea of any Republican president, I wouldn't feel as shocked or sad about one with actual political experience.  I voted enthusiastically for Obama in the past two presidential elections, but at the same time, I acknowledge that both John McCain and Mitt Romney would have brought valuable experience and insight to the table.

For those of us with misgivings about Trump--and I suspect that this group may even include some people who voted for him--the big question is where we go from here.  How do we respect the outcome of our democratic process while simultaneously working to protect what is important to us?

Inspired by my sister's good example, I decided to start off by making a couple of charitable donations.  What unnerves me the most about Trump is his willingness to fan the flames of ethnic and religious bigotry.  Accordingly, I made a donation to the Southern Poverty Law Center.

I also made a donation to the Karam Foundation which helps both Syrians inside Syria and refugees.  I studied in Syria between 2004 and 2005, and I sometimes like to say that the country is tattooed on my heart.  The situation there has been a source of heartbreak to me and many others since 2011.  From Trump's statements during the campaign, I doubt the US will take in any additional Syrian refugees over the course of the next four years.  To me, that made it particularly important to support an organization that is helping the people who are caught in this terrible conflict through no fault of their own.

Aside from charitable donations, though, I'm short on ideas.  If anyone has any thoughts on where to go from here, I would love to hear/read them.  As always, I will be hoping the best for our country.
Posted by Hannah at 3:15 PM No comments:

Tuesdays are long days for me.  Thank heavens for early voting!  I won't get home until late tonight, at which point I will be faced with two choices:

1.  Stay up and watch election returns with the expectation that we will know who our next president will be sometime tonight.

2.  Go to sleep, with the expectation of waiting until election day is completely over and finding out who the next president will be tomorrow morning.

On the one hand, this election has made me incredibly tense.  I've been checking the news today, even with the knowledge that it was too early for any "real" news.  How can I possibly go to sleep without knowing the outcome?

On the other hand, I've had two bad nights of sleep in a row.  I'm exhausted.  And if this election turns out badly, I may not get any sleep for the next four years.

Sweet dreams to all, whatever you decide to do about watching election returns.  One thing I think everyone can agree on is how nice it will be to see the end of this particular campaign!
Posted by Hannah at 3:24 PM No comments:

Email ThisBlogThis!Share to TwitterShare to FacebookShare to Pinterest
Labels: US living 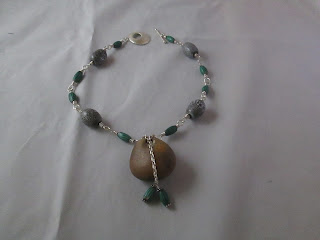 Toward the end of our vacation in England last July, we spent an afternoon in Aldeburgh, a pretty seaside town on the east coast.  It was a very pebbly beach, unlike any beach I had ever seen before. In the face of such found object bounty, it was hard to keep myself from lugging ten pounds of pebbles home.  I did come away with a few, though, including a beige pebble with a hole located conveniently near one edge.  It's what I would call "nature's bead."  The hole actually contained some tiny pebbles that were wedged in tightly, but Scott helped me to clear them out.

I knew I wanted to try making a necklace with this find, but had a few things to think about.  First of all, this stone is relatively heavy.  That made me think it would be best to put it on a short necklace.  If the necklace were long, the stone would swing back and forth and hit my chest while I wore it, which wouldn't be very comfortable.  Also, the stone was thick enough that wrapping wire around it would have been challenging,  I knew from experience that it would be hard to get a good fit that didn't look clunky using wire, so I used short lengths of chain both to join the stone to the two sides of the necklace and to add the two beads that dangle from the bottom of the stone.  The last thing to think about was what beads to put with the stone.  The stone's large size pointed to using fairly large beads.  I also though that beads that didn't look too uniform or shiny would be best here--no strands of pearls or Swarovski crystals for this "nature's bead!"  I found some beads in my stash that I was very happy with--four large brown ceramic beads to echo the color of the stone, and a bunch of green striped African trade beads to add some color.

I linked all the beads together with fairly thick wire, thinking again about the size of the stone and trying to keep the rest of the necklace in proportion.  I found a toggle clasp with a shape that sort of echoes the stone's shape.  People won't usually see the clasp, of course, but I like the have my clasps harmonize with the rest of the piece if possible.

Once I thought of a design and selected my beads, the necklace came together fairly quickly.  I've been enjoying having another piece that reminds me of a fun trip.  It's a good pick-me-up on days when the next vacation seems impossibly far away.
Posted by Hannah at 7:09 PM No comments: