So You Want To Work Abroad...

Does anyone remember a post I wrote a while back in which I alluded to moving?  Well, it's probably time to share the reason behind that move.  We moved because I was offered a job in the DC area.  Scott and I have resigned from our jobs in Kazakhstan, and will not be going back there.

When we first accepted our job offers in Kazakhstan, we planned to stay there for at least three years, and maybe longer.  Part of me feels sorry that our plan didn't work out, particularly when I think about some of my students over there.  But we also had good reasons for leaving, and in the end, very few decisions don't come with an element of regret.

It's funny thinking back on my expectations when we decided to work over there.  I have very fond memories of studying abroad, and I thought working abroad would be similar, but with a salary.  I started this blog in part because I imagined having all sorts of cool adventures and discoveries that I wanted to document.  And there was some of that--along with an awful lot of life as usual, but without many of the comforts and conveniences of home.

Since I'm not going back, I thought I would write a small series of posts on working abroad.  I realize, of course, that no two jobs anywhere are the same, and that even at the same job, everybody has their own individual experience.  I'm also not trying to either encourage or discourage other people from working abroad.  But I wanted to document some of my thoughts on the process and lessons learned (sometimes lessons learned the hard way) in case it would be useful to anyone else.

Since lessons learned the hard way often have an air of negativity to them, though, I thought I would use this post to list some of the very positive aspects of my experience there:

1.  We met all sorts of interesting people.  Between our colleagues and our students, we met a lot of great people, many of whom we may never have met otherwise.  Isn't it funny how life works that way?  You do something seemingly random, like taking a job in Kazakhstan, and end up gaining a social circle.

2.  In spite of the constant interference from work and "real life," we took some great trips.  Uzbekistan had been on my list of must-sees for a long time, but I don't know if I would have seen it if I hadn't already been so close.  We saw some great things in Kazakhstan itself, too--particularly the flamingos and the Aksu Zhubagly nature preserve.  Georgia hadn't even been on my radar until eating Georgian food in Astana,and I'm really glad we went!  We chose Austria for our spring break trip last year in part because of the direct flight from Astana, and I'm very happy to have visited it, too.  I had never seen Europe (aside from airports and the European half of Istanbul), and now I'm anxious to see more of it.

3.  We were able to save some money more quickly that we would have in the US.  Not having to pay rent makes saving much easier.

4.  I got to stretch my wings professionally.  My teaching experience prior to going to Kazakhstan consisted of having been an adjunct instructor for a year.  Then, all of a sudden, I was starting a program and making all my own teaching decisions.  I'm very grateful to have had that opportunity.

5.  My attitude toward stuff has changed for the better.  Having a massive forced de-cluttering session before moving to Kazakhstan and back to the US has changed the way I think about possessions.  I doubt I'll ever be a hard-core minimalist (too many craft supplies, for one thing), but I am thinking much more carefully about both stocking up on anything "just in case" and holding on to stuff I'm not really using "just in case".  I think I finally have it in my head that more stuff does not necessarily make life any easier.

We saw some pretty buds. 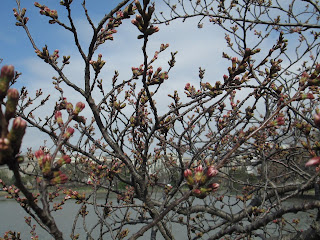 And even a few early blossoms! 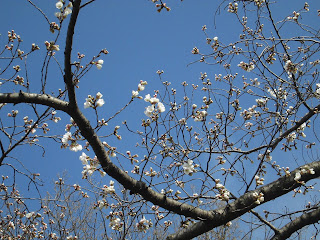 We saw what I can only guess are beaver deterrents.  Don't the beavers know they're only supposed to go after trees no one cares about, not trees that draw throngs of tourists to the tidal basin?! 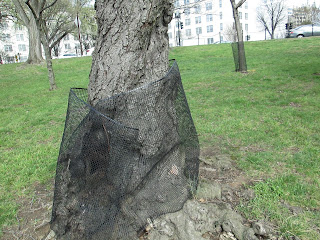 Take this guy, for instance.  He's completely focused on how humans are destructive around the cherry trees, while turning a blind eye to the egregious behavior of his own species. 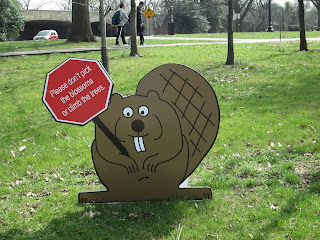 It was a beautiful day even without an abundance of showy blossoms.  I love being so close to so many things people travel to visit. 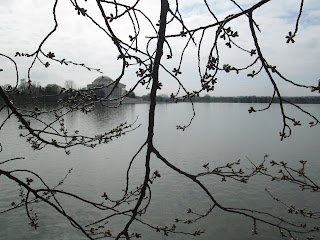 Expanding My Horizons, Mostly Against My Will

The DC Metro system shut down at midnight yesterday, and isn't scheduled to reopen until 5 AM tomorrow.  I'm not sure how important most people outside the region found that particular piece of news, and to be fair, there are far worse things going on in the world.

But the fact that there are far worse things going on in the world wasn't very comforting to me late last night when I found out that the metro would be shut down and had to scramble to find another way to get where I needed to go in the morning.

Fortunately, I found a Metro bus that was pretty convenient to take.  It took a bit longer using it than using the train, but on the other hand it was cheaper.  So I learned something new and useful!

I'm just hoping this new piece of information won't have to make a habit of being useful.
Posted by Hannah at 5:54 PM No comments:

These pieces of packing material were made of styrofoam, which in and of itself is somewhat noteworthy these days in the US.  Styrofoam packing material seems to have largely fallen out of favor here, for any number of very good reasons.  I'd sort of forgotten how to deal with it when it does arrive.  Even after we took out our belongings, the box appeared to be almost full of these little styrofoam pieces.  How does that even happen?  And more to the point, how were we going to dispose of them, living as we do in a building with fairly narrow trash chutes that couldn't possibly accommodate a large box filled with styrofoam?

We resorted to having Scott use our snow shovel to scoop the styrofoam pieces out of the box and dump them into garbage bags that I was holding open.  We filled two entire garbage bags, one of which burst open as soon as I dropped it down the trash chute.  Sigh.

Usually, at least in the US, we refer to this particular variety of packing material as "styrofoam peanuts" because of their shape.  These didn't seem to be particularly peanut-shaped, so I've decided to call them styrofoam shark teeth.  I considered calling them styrofoam boomerangs, but was afraid that would encourage them to come back.
Posted by Hannah at 7:25 PM 1 comment:

In many ways, it was difficult to maintain a healthy lifestyle in Kazakhstan.  Many fruits and vegetables were very seasonal; others, like kale and chard, were completely unavailable, as far as I could tell.  Exercise was also problematic.  Kazakhstan's (and particularly Astana's) notorious winters made outdoor exercise unpleasant for several months out of the year.  To compound difficulties, we essentially lived on an isolated construction site, and often had to dodge construction equipment while we were out and about.

So, we're taking advantage of being back home to try to get both our eating and our exercising back on some sort of reasonable track.  We're getting a fair amount of walking in our daily lives right now, but we decided to go on a more ambitious walk today.  We took the Georgetown Branch trail from Silver Spring to Bethesda.

A good portion of the walk was actually just getting to the trail, as we live a ways from it.  The whole walk took about an hour and a half.  I think it'll be a very pretty walk soon, once we start seeing leaves on the trees again.  But even today, we had some green in the form of bamboo thickets and a few flowers. 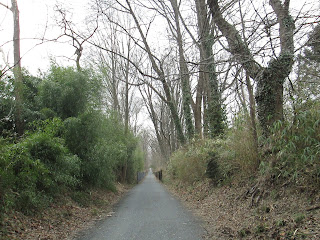 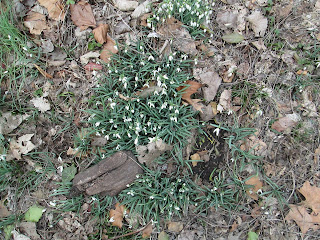 Then, when we got to Bethesda, we ate healthy lunches with plenty of veggies!

We decided to take Metro back to Silver Spring, although in retrospect, we're half wishing we'd walked back.  I knew we would be in for a longish ride, since we would ride south from Bethesda into DC, and then north back to Silver Spring.  In addition to that, we had to wait quite a while for a train because of single-tracking.  Then, we ended up stopped at one station for several minutes due to an "altercation" on one of the other cars that required the intervention of the Metro transit police (!).  Not all Metro rides feature those particular complications, but maybe we'll consider walking back next time we go to Bethesda for the extra exercise.

I don't want to sound cheesy, but I think one benefit of a challenging living situation is that it makes us feel more appreciative of simple things.  I'm enjoying the well-above-freezing temperatures, pleasant places to walk, and availability of a wide array of veggies more than I would have thought possible.  I hope the novelty doesn't wear off too soon.
Posted by Hannah at 7:01 PM No comments: