Scott and I took a road trip to Georgia today. While on this road trip, we had occasion to experience one of everyone's least favorite aspects of road trips--using a gas station restroom.  I've used enough not-terribly-pristine restrooms that general sketchiness (which this one had in abundance) doesn't usually bother me that much.  But his particular restroom had a twist that will forever set it apart in my mind:  Its toilet paper dispenser flew open very suddenly and hit me on the side of the head!  Needless to say, it was startling, and it actually hurt quite a bit, too.

I'm not up on specific vocabulary to describe toilet paper dispensers, but this one was a large plastic one with room to hold two large rolls of toilet paper.  It looked something like this one: 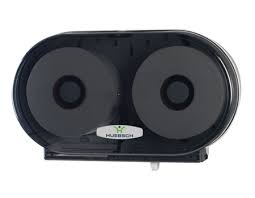 I was convinced that I'd had a truly unique experience, so when we got back in the car, I started doing internet searches on my phone to see if this had happened to anyone else.  (Can my phone still be referred to as a "smart phone" when I use it to conduct any type of searches that contain the phrase "toilet paper dispenser"?)  I found at least two stories about metal toilet paper dispensers coming apart or coming off the wall and resulting in serious injuries and lawsuits.  So, I guess I should feel lucky that the plastic TP dispenser only resulted in a bump on my head.

There is a school of thought that it is good to learn something new every day, but I think I could have done without today's lesson, such as it was.
Posted by Hannah at 3:36 PM No comments:

Email ThisBlogThis!Share to TwitterShare to FacebookShare to Pinterest
Labels: rants, US travels

Then And Now, As Seen Through Kitchen Wares

With dramatic downsizing and deaths among some of my elderly relatives, there has been a large supply of housewares in the family pipeline over the past few years.  Since Scott and I sold and donated so much of our stuff before moving to Kazakhstan, we have been gratefully accepting a good number of things that were looking for new homes.  It's fun to have things that belonged to someone else in the family; plus, it's always one less thing for us to buy now.

A box of china made its way to my dad some months ago.  It had belonged to one of his grandmothers, who died before I was born.  He asked me if I wanted it.  I hesitated, thinking I would have to wash everything by hand.  But my dad said he thought it would be okay in the dishwasher, and that if it wasn't, nobody was going to be upset about it.

I looked at one plate at the time to check out the floral pattern on it, but left the rest packed away until we moved in to our new apartment.  When I started unpacking the china, I was fascinated by some of the stuff I found.  First of all, there were twelve (!) teacups.  They were much smaller and daintier than the cups people generally use now to drink the hot beverage of their choice, and they came with saucers!  There was a set of small, shallow bowls whose intended function I can't guess.   Dinner plates were to be expected, of course, but the ones in this set are smaller than modern dinner plates.  (Maybe the small dinner plates will encourage me to eat less!  Ha!) Then, I unpacked further and found a sugar bowl, cream pitcher, and gravy boat!

I had a similar experience with silverware.  We were already using a set of silverware that had belonged to my mom's aunt, but we kept running out of key pieces like "regular" forks and soup spoons.  So when my dad offered us a set of silverware from my grandparents' old house, we took it to supplement our existing silverware.  I found some pretty amazing things in that box, too.  I found spoons with abnormally long handles (iced tea spoons?).  I found tiny forks with three tines.  A casual web search suggests that these are dessert forks.  The forks that I had thought for years were dessert forks (the ones that are a bit shorter than "regular" forks) are evidently fruit forks, at least according to the website I consulted.  This set of silverware even came with a cake server, which seems like a very good excuse to eat more cake.

In the end, space limitations and the near certainty of another move within the next several months are making me pass up this opportunity to become a classy person who knows how to set a table properly.  The gravy boat from the china set is destined to find a new home because it's rather bulky and gravy is not a part of my regular dinner rotation.  There are only so many beverages I care to drink in very small quantities, so half of the teacups, as well as all of the saucers that came with them, will similarly be sent on their merry way.  I would probably keep the sugar bowl and cream pitcher, except that I already have ones that I like, and the thought of having everything match doesn't seem like a compelling enough reason to keep extras on hand.

I haven't yet decided the fate of some of my more outlandish silverware.  Silverware is smaller and less breakable than china, so it doesn't pose the same immediate set of problems.  Something tells me, though, that even if I keep the entire set, I will probably continue in my terribly uncivilized habit of using "regular" forks for every part of the meal, even though I have the opportunity to do otherwise.

Posted by Hannah at 6:43 PM No comments:

Email ThisBlogThis!Share to TwitterShare to FacebookShare to Pinterest
Labels: moving

Can't You Smell That Smell?

You know that new car smell that most people seem to like (but that makes me nauseous)?  It turns out new furniture can have it, too.

Scott and I just moved into a new apartment.  Because we sold most of our furniture before we went to Kazakhstan, there were a few pieces we needed to buy to be comfortable.  One of those was something comfy to sit on in the living room.

We were originally talking about buying a second hand couch, but my parents told us about a great discount furniture store in town, and we ended up buying the few pieces we really needed from them.  I was particularly excited about the couch.  In terms of comfy living room furniture, Scott and I have had the following items in the past:  a hand-me-down love seat, which we sold before spending a year in Jerusalem; a futon couch from Target that fell apart the first time we tried to move it to a new apartment; an Ikea wood frame chair with cushions that we sold before moving to Kazakhstan; and two hand-me-down easy chairs from my parents that we also sold before moving to Kazakhstan.  You may be able to see the theme of hand-me-down pieces of furniture and furniture that appeals to the college student set.  Picking out a couch--even from a furniture store that had somewhat limited selection--was a big deal, and I was happy with both the couch itself and the deal we got on it.

When our couch and other pieces of furniture were delivered, the delivery guys told me that they had had a new, unwrapped couch identical to the one we had tried out in the store, and that they had brought that one for us.  I thought this was a nice gesture, and thanked them for it.

But then yesterday, I started to notice a chemical odor in the living room.  This morning, I determined that it was definitely coming from the couch when I sat next to the couch sorting through a pile of books that were sitting by it.  I probably should have known better and just taken the entire pile of books someplace else, but I convinced myself that it wasn't a big deal.  I ended up nauseous, and spending a good part of the day in a coffee shop to get away--not an ideal situation when there are still boxes to unpack.

I looked this up on the internet, and the term people seem to use for this phenomenon is "off-gassing," which brings to mind all sorts of furniture fart jokes.  Ironically, it sounds like I might have had less trouble if the delivery guys had brought the actual couch we had sat on in the store since it has had more time to air out.  I'm sitting here with the balcony door open, letting in all the cold air, hoping the smell and my nausea go away soon.  Maybe this is an ironic punishment for thinking that I might have some control over the color scheme or style of my surroundings.  As lovely as the couch is, I'm thinking of surrendering to the thrift shop fates for any future furniture needs, no matter how many loud prints or 1970's colors I share my home with as a result.

Posted by Hannah at 2:37 PM No comments:

Email ThisBlogThis!Share to TwitterShare to FacebookShare to Pinterest
Labels: moving

It's been a whirlwind since we returned to the US.  In addition to seeing family and friends, and eating the foods we didn't get to have in Kazakhstan, we also located an apartment and signed a short-term lease.  We're in the process of unpacking a sea of boxes now.  It's enough to make me feel pretty anti-stuff again, but I suppose as time goes on, I'll be grateful to have sheets on the bed, towels in the bathroom, and dishes to eat off of.

So far, there seems to be a lot to like about the apartment.  The complex seems quiet, there is a good amount of both floor space and storage space, and the kitchen has a decent amount of counter space.  There are a couple of interesting quirks I've already noticed, however:

1.  With seven (!) closets in a two-bedroom apartment, only one of them has room to hang long stuff like pants, dresses, and butt-covering coats.  The rest of them have more built-in shelves, which is great for almost everything else.  Interestingly, this one closet that has room to hang the long stuff is in the second (non-master) bedroom.  This works fine for us since we're just a couple and we're using the second bedroom as a study anyway.  But imagine parents with kids trying to choose between keeping the master bedroom for themselves or having easy access to their longer items of clothing.  Or, worse yet, imagine roommates trying to sort this out.

Wishing everyone logical home design for 2016!
Posted by Hannah at 7:02 PM No comments: