We started out on an amble toward one of Vienna's Habsburg palaces, Belvedere Palace.  On the way, we walked through Stadt Park.  We were starting to see some early signs of spring--a few pale green leaves, some flowers.  A lot of the trees were still bare, though, aside from some truly amazing looking clumps of mistletoe.

It took us some time to find the entrance to Belvedere Palace.  Maybe we were approaching from an unusual angle, but there seemed to be little signage.  In fact, an Indian restaurant that was located nearby seemed to have more prominent signage than the palace complex itself.  Once we arrived, it was well worth a visit, not only for the two palaces of the complex, but also for the art exhibited.  The upper palace had several Klimt paintings, which I enjoyed seeing.  The grounds appear to be quite elaborate, as well.  We were there too early in the spring to get the full flavor, but numerous bare trees and shrubs carried the promise of future flowers.


After spending most of the morning at Belvedere Palace, we decided to head to Naschmarkt for lunch.  It took us a while to find that, too, but was also well worth it.  I had imagined a completely covered market, but it turned out to have uncovered walkways, with assorted restaurants and shops.  We had a giant seafood lunch of seafood steamed in white wine.  Yum!  I was very happy with what we ate, although when we walked around some more after lunch, I was sorry to not also be able to try the falafal.  Some of the falafal stands were gathering a crowd, which made me think it would be fresh and tasty.  I looked sadly at the produce--I wish I could get such quality and variety in Kazakhstan.  I did buy a bag of brown mustard seeds, having recently run out of them and not located a source in Astana.

We then visited Karlskirche, a baroque church on the way back to the area where we were staying.  The church was quite striking even from the outside, and we decided to go in to see its frescoes.  One thing that was unusual in Karlskirche was that we were able to get quite close to the inside of the dome by taking an elevator and then a series of stairs.  There was something about this particular elevator that brought out a sudden fear of heights in me, but Scott encouraged me to keep going and take the stairs to the top.  I wonder if it'll ever see frescoes painted in a church dome at such close range again.

Last, but not least, we visited Cafe Sacher to try their sachertorte!  I would highly recommend this dessert to all chocolate lovers.  It had layers of chocolate cake with apricot jam between layers and a dark chocolate frosting.  It was served with unsweetened whipped cream.  On the whole, it was probably not as sweet as many American chocolate cakes, but I loved it because the chocolate tasted like it was of very good quality. 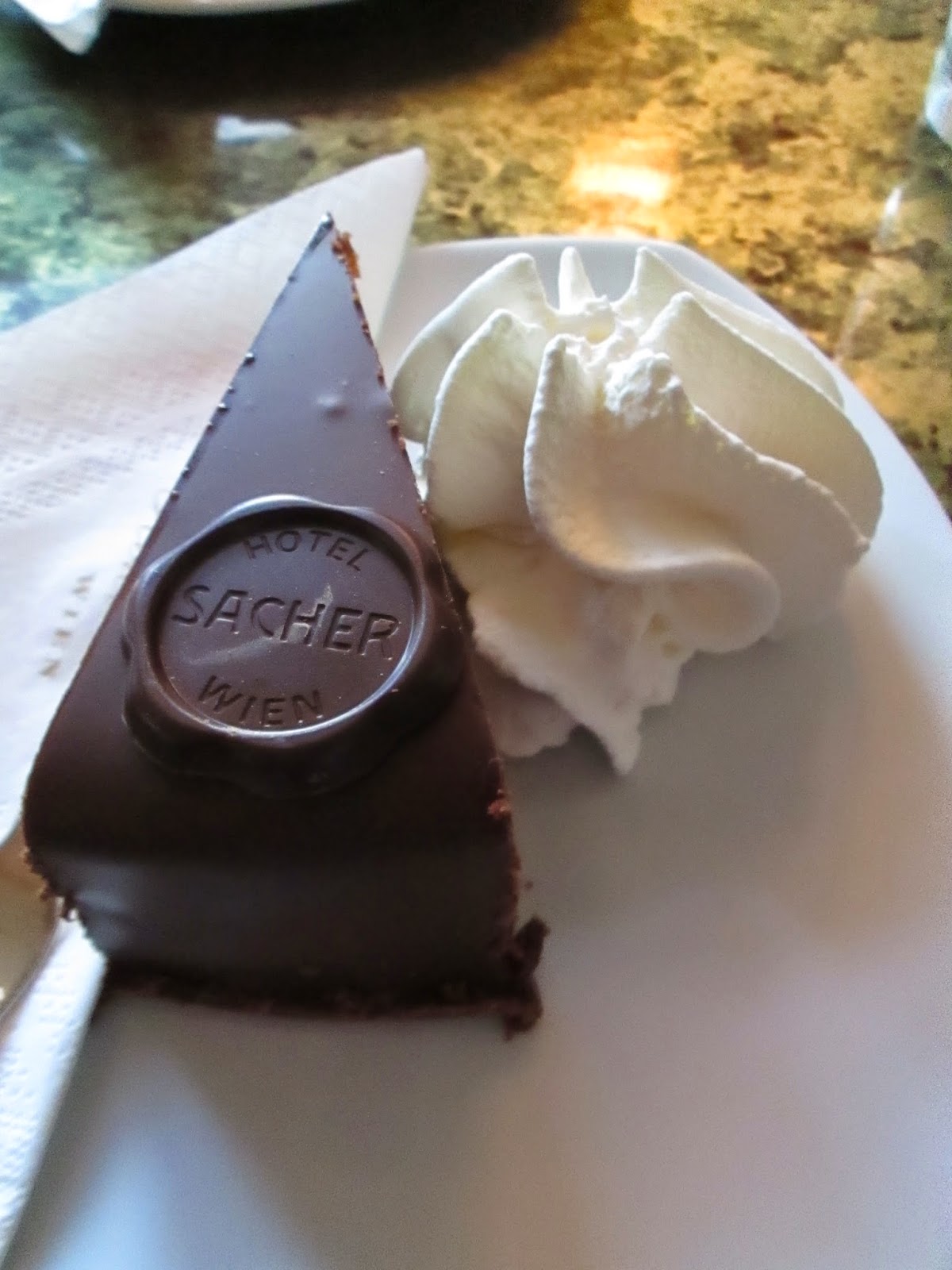 The midday steamed shellfish meal combined with the late afternoon sachertorte pretty much killed our appetites for dinner, so we had yogurt and fruit in our hotel later.  I was happy even with that, though, because there was so much nice yogurt and fruit available in the grocery store we popped into.  Besides, I think sachertorte is worth killing my appetite for.

Posted by Hannah at 7:35 AM No comments:

Saturday and Sunday in Vienna

First of all, there were no travel snafus leaving Kazakhstan.  I cannot overstate my happiness at this.  The flight wasn’t even at too horrible of an hour.  It left at 7:40, which meant an early morning, but also some sort of opportunity to sleep the previous night.

We took Vienna’s wonderful train from the airport to the city center, and had maybe a ten minute walk to our hotel.  Our room wasn’t ready yet, so we stored our luggage, went out for breakfast, and took a walk around the area to get our bearings.  Up until this point, my experience of Europe consisted of the European portion of Istanbul and a handful of airports, so Vienna was something very different for me.

Due to our early wake up and our lingering winter diseases, we decided to take a nap after that.  We got up in time for dinner, and went to a place recommended  by our guidebook as having some of the biggest and best schnitzels.  I wasn’t sure what I would think of the schnitzels, but they were terrific, and mine very impressively stuck out over the edges of the plate.  We got salads with these, and it was such a treat to have an array of leafy greens again.

The next day, we had various time constraints.  First, Scott and I ended up with some administrative tasks to take care of in the morning.  Secondly (and more enjoyably), we had purchased concert tickets at the Musikveirin in the evening.  We did some more wandering around with some smaller activities interspersed until it was time for the concert.  We saw the Anker clock, visited one of the two Judenplatz museum buildings, and saw the memorial to the victims of fascism

The Musikveirin was an impressive concert hall.  We saw the French Radio Philharmonic Orchestra perform Tchaikovsky and Berlioz.  We didn’t know much about the seats we were getting when we bought the tickets.  It’s a good thing we didn’t buy the cheapest seats because those appeared to not be seats at all, but rather a place to stand in a crowd.  I think our seats were the next price bracket up, and they were literally on the stage, behind the musicians.  I have never experienced that sort of seating arrangement, and it seemed quite surreal.  The sound quality was great, so I can’t complain!  Also, I was impressed that I didn’t hear a single cell phone or see a single camera flash during the performance.  Kudos Vienna concert-goers! 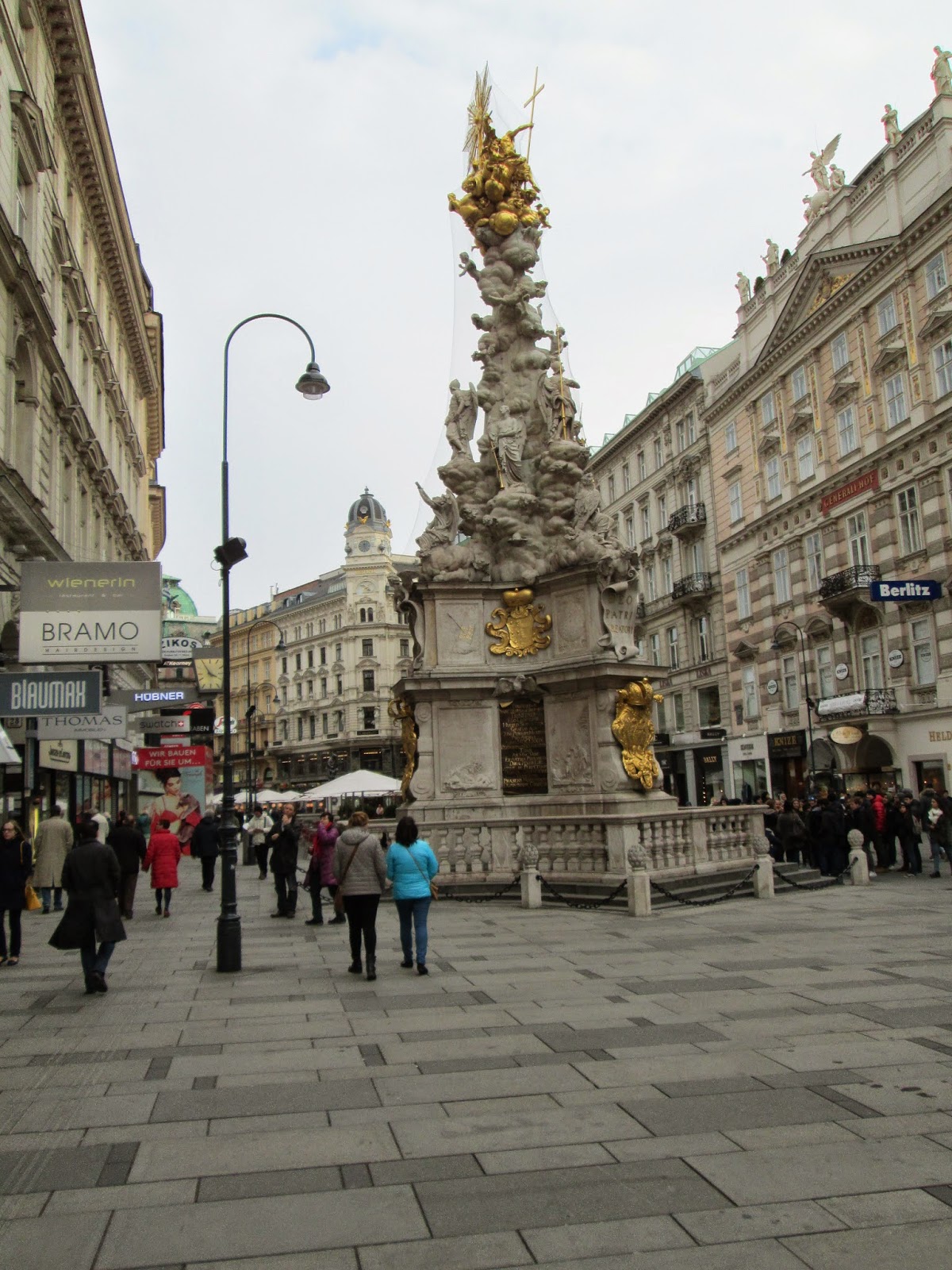 I thought this sounded interesting, but didn't really want to plan a day around clock-watching.  However, Scott and I each had some administrative tasks to tend to on Sunday.  By the time we were done, it was pretty close to noon, and our hotel isn't far from the clock, so we decided to go.  A crowd of maybe twenty or so people were gathered to watch.

I haven't found an exhaustive list of all the historical figures on the clock, although I also haven't researched it too exhaustively yet.  It can be fun to guess or to make things up, anyway.  I managed to get a photo of each historical figure or pair. 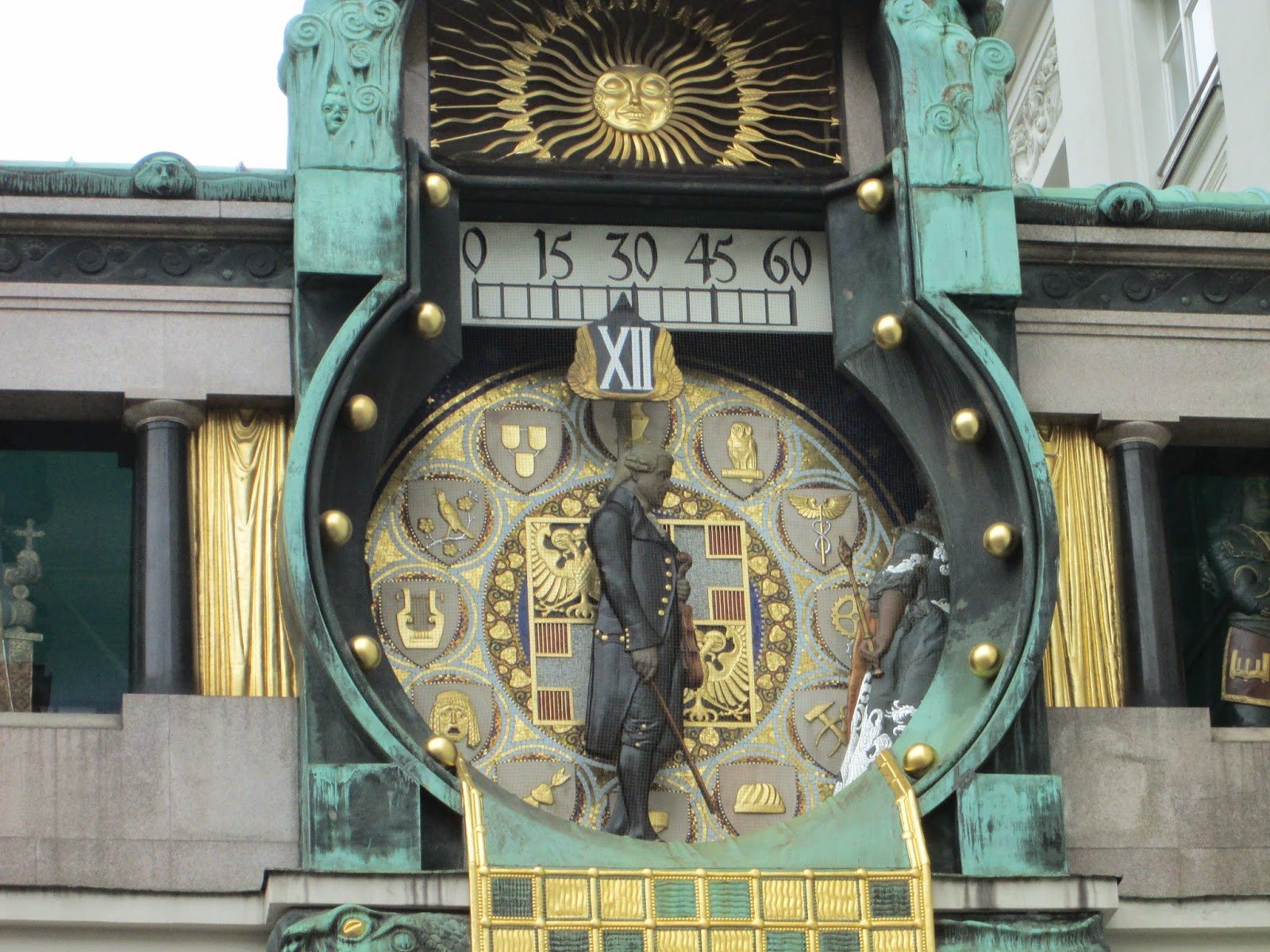 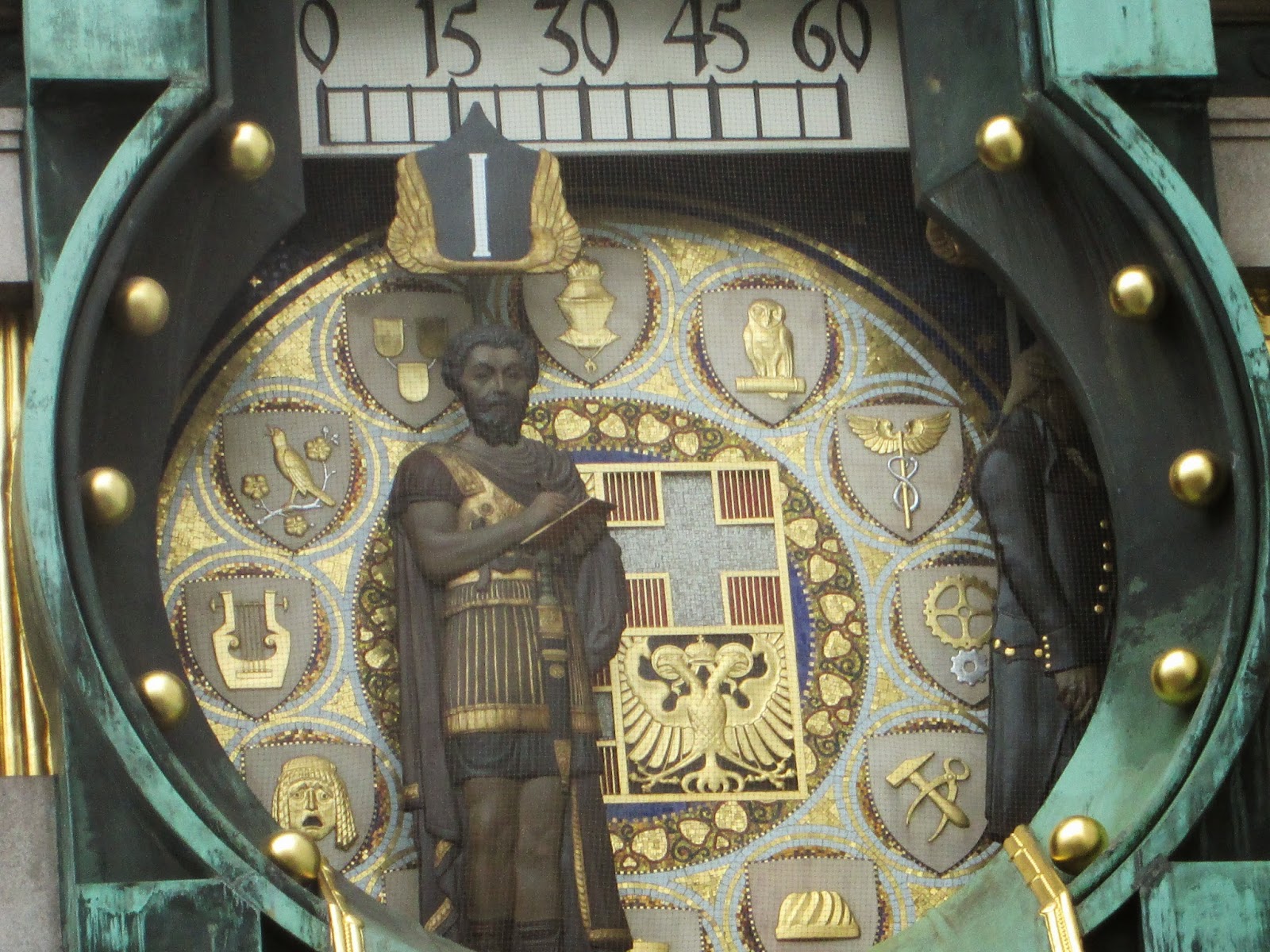 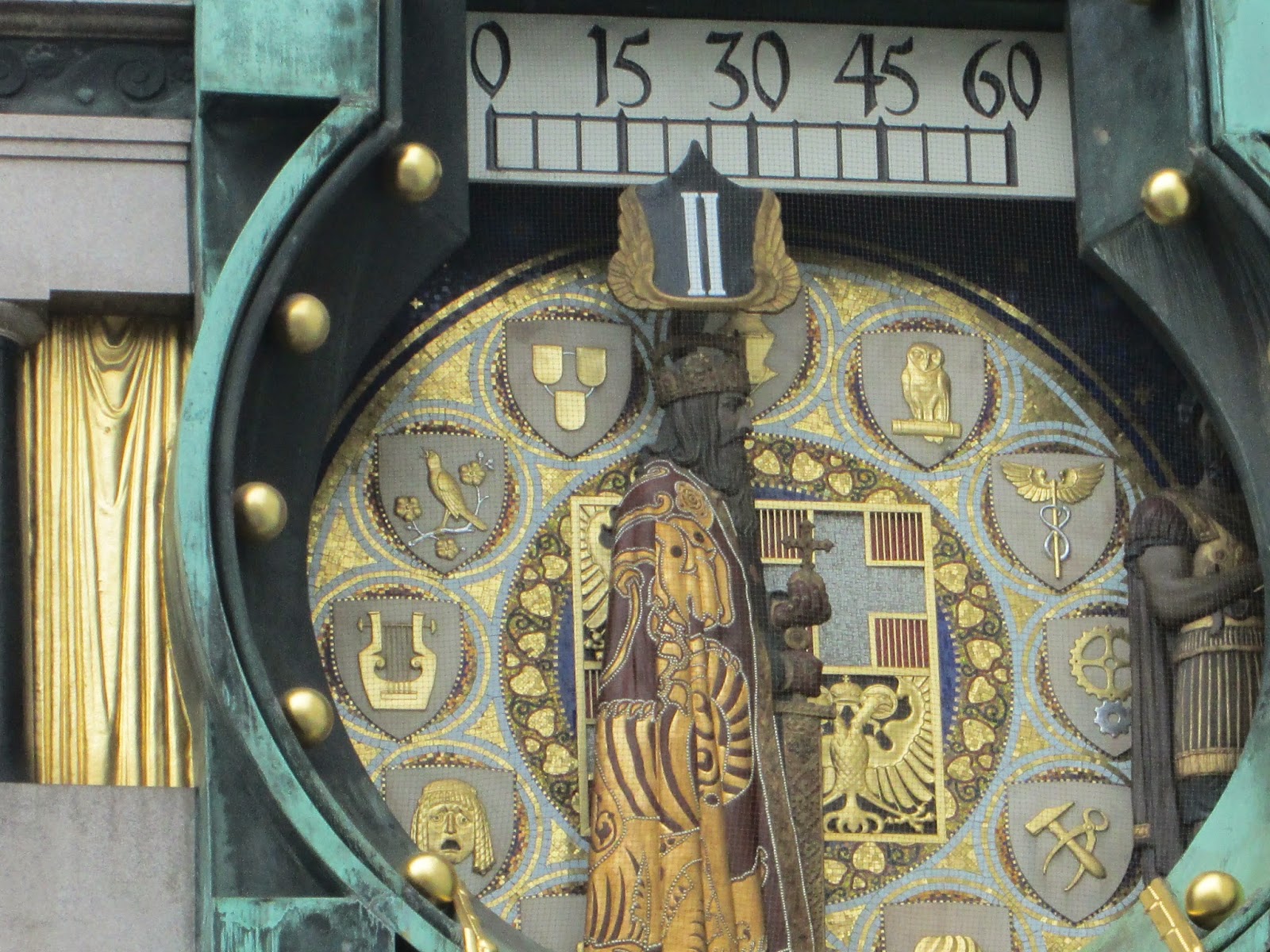 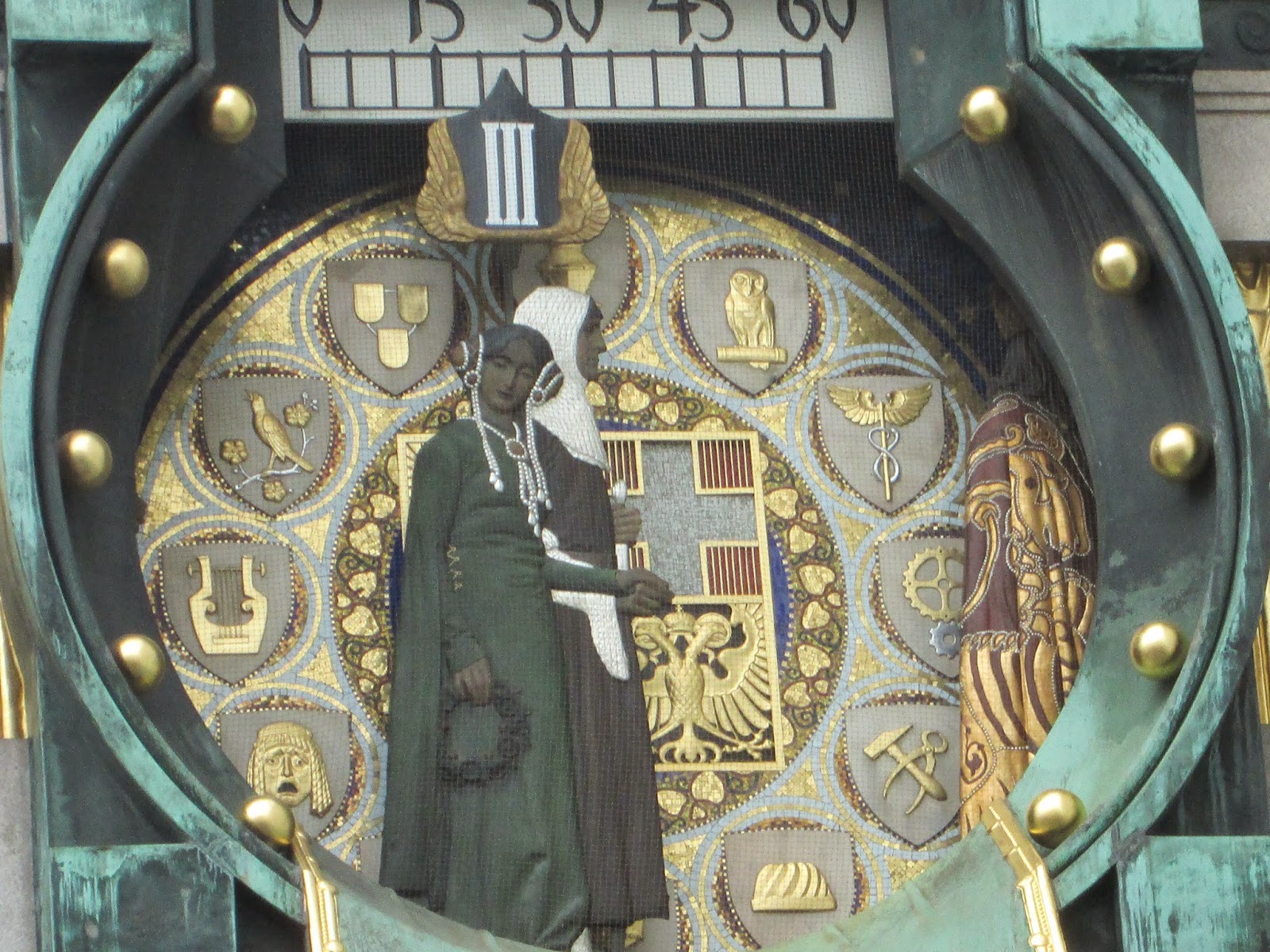 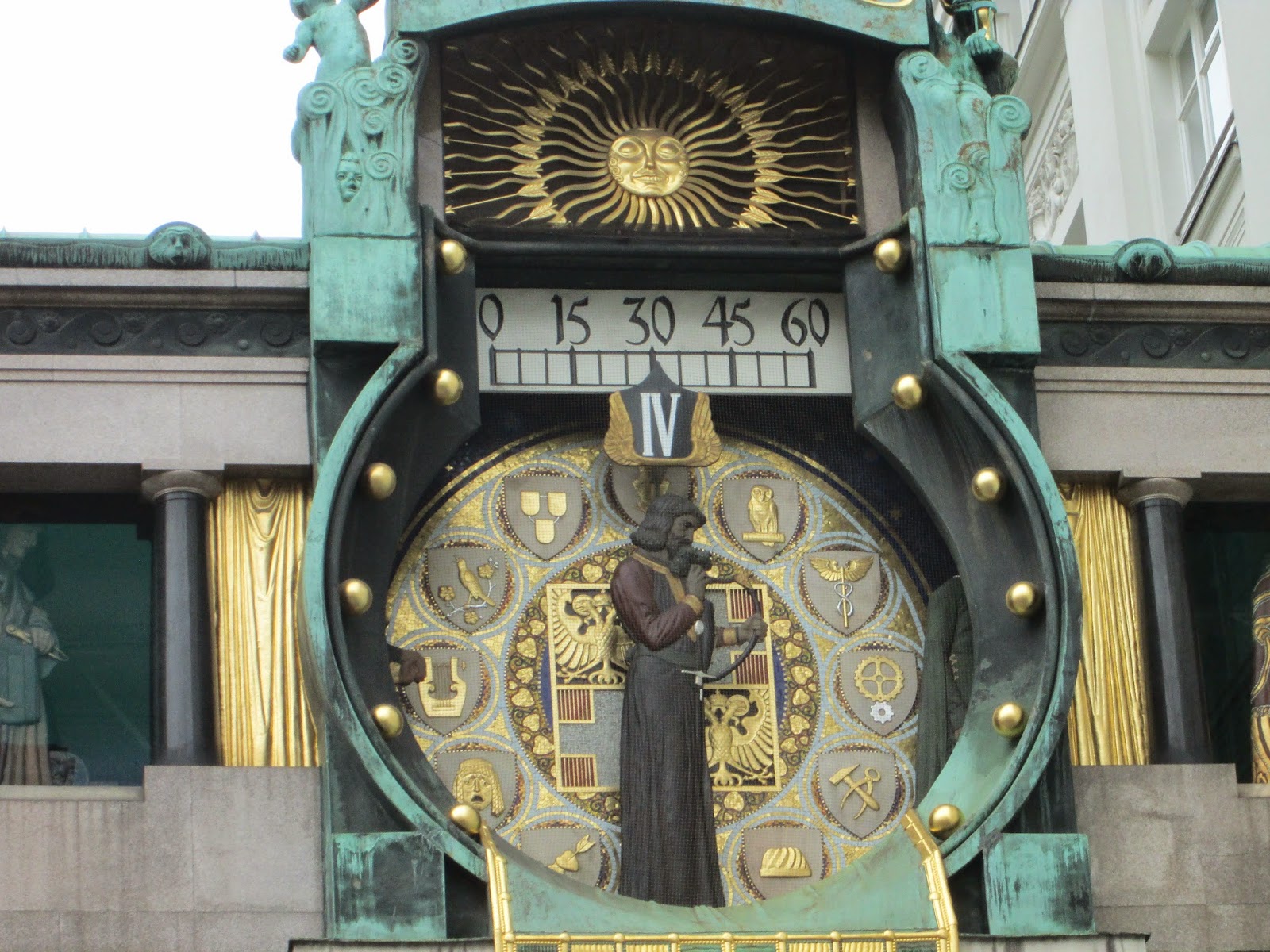 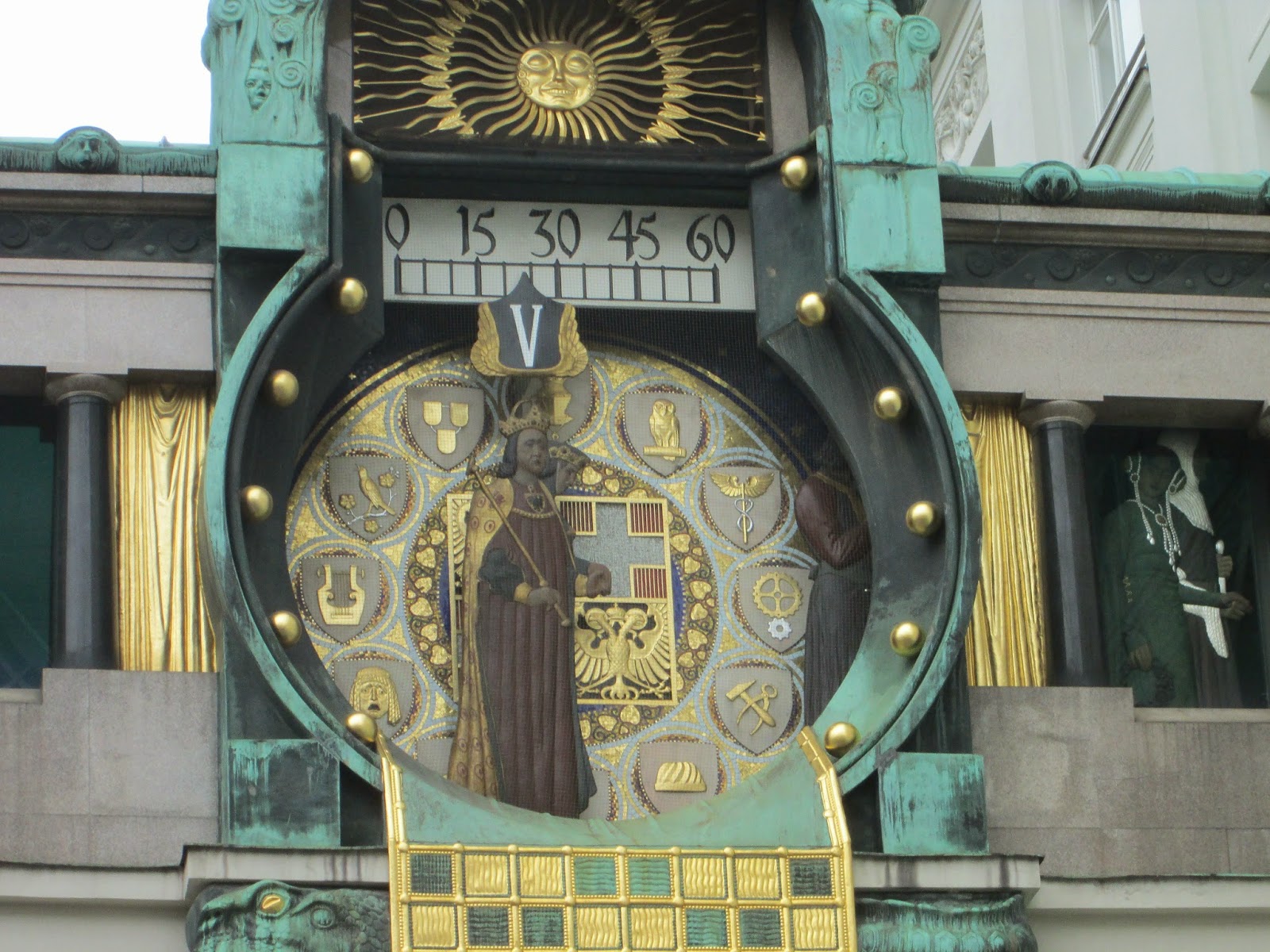 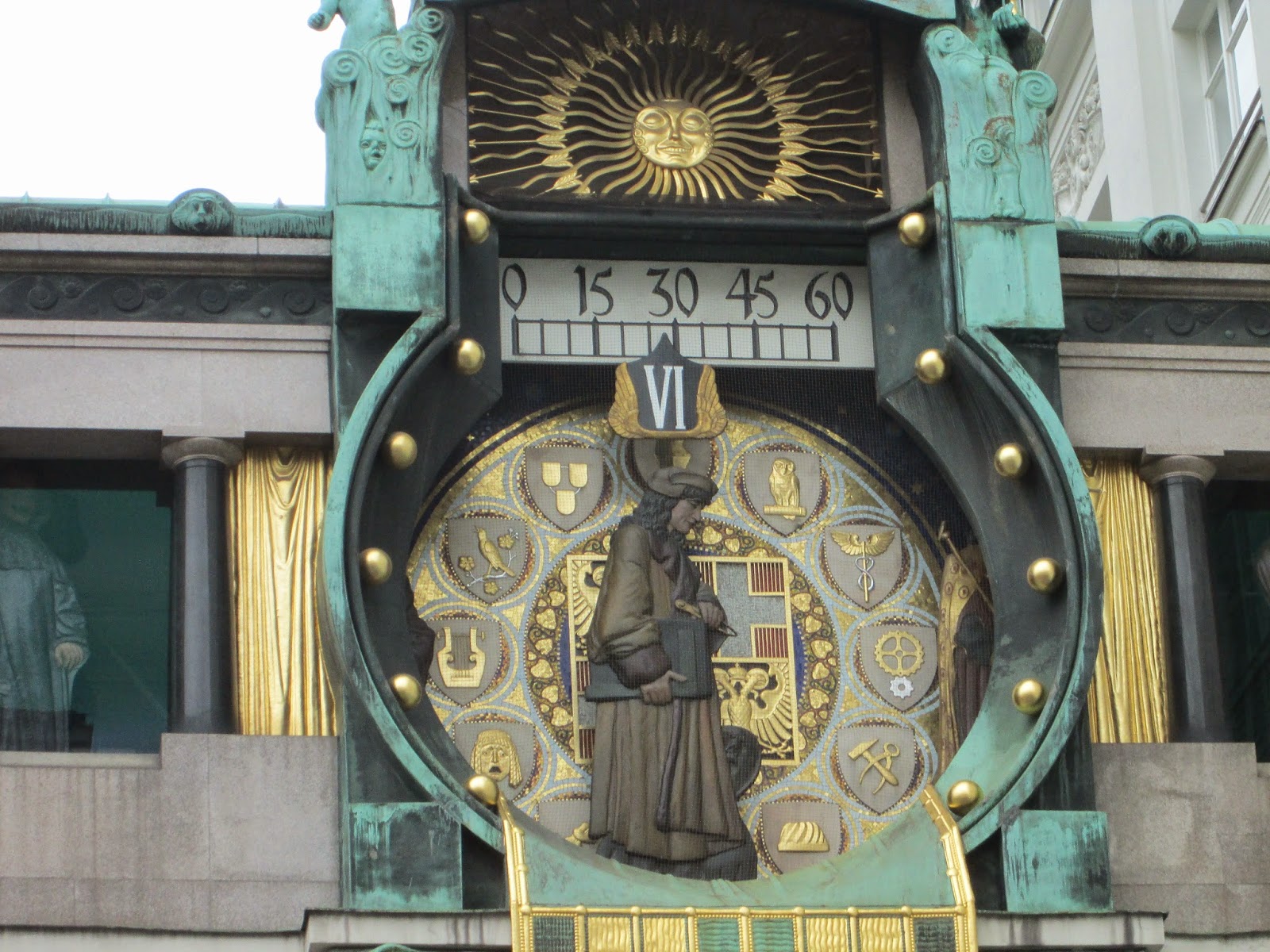 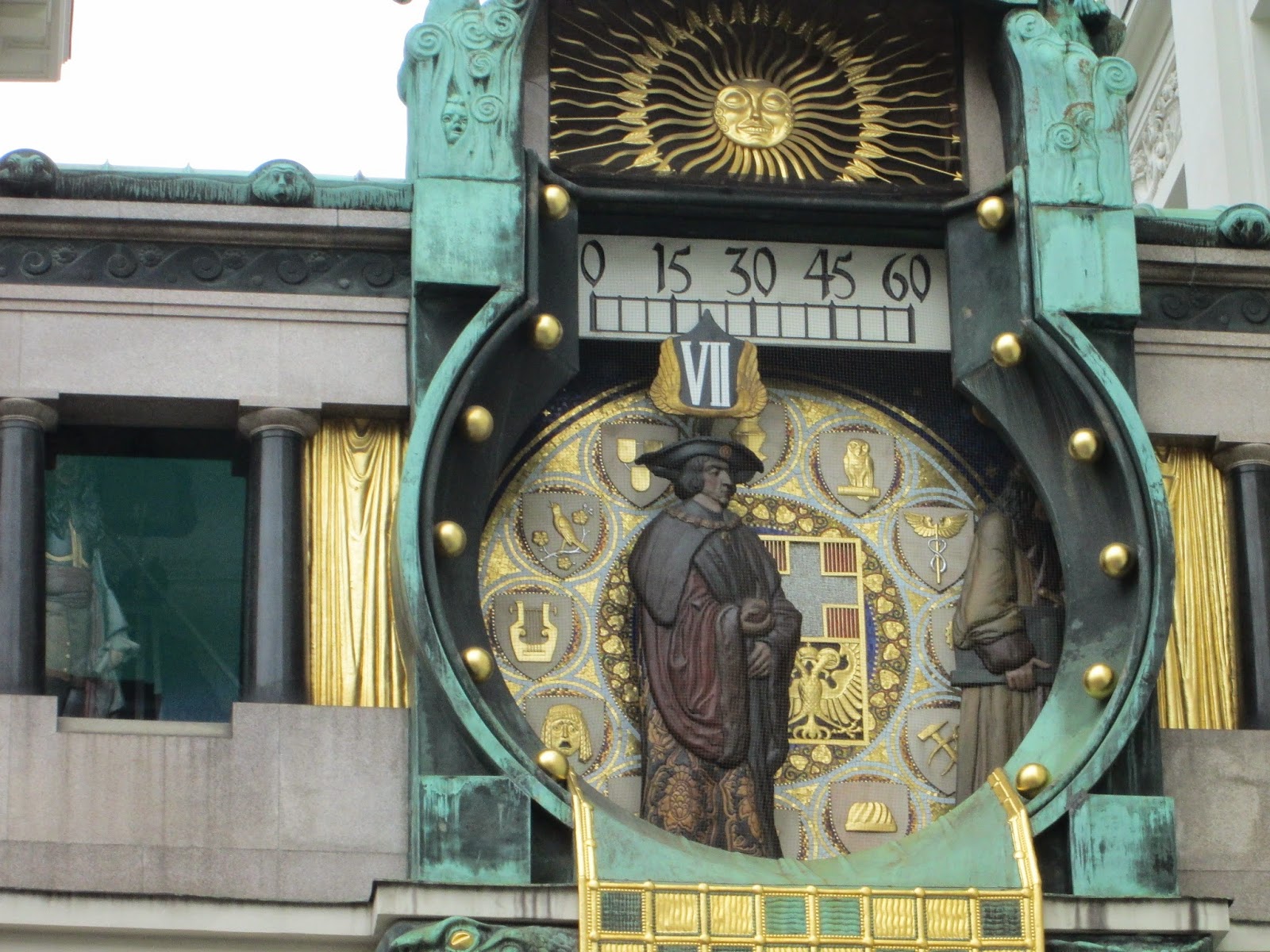 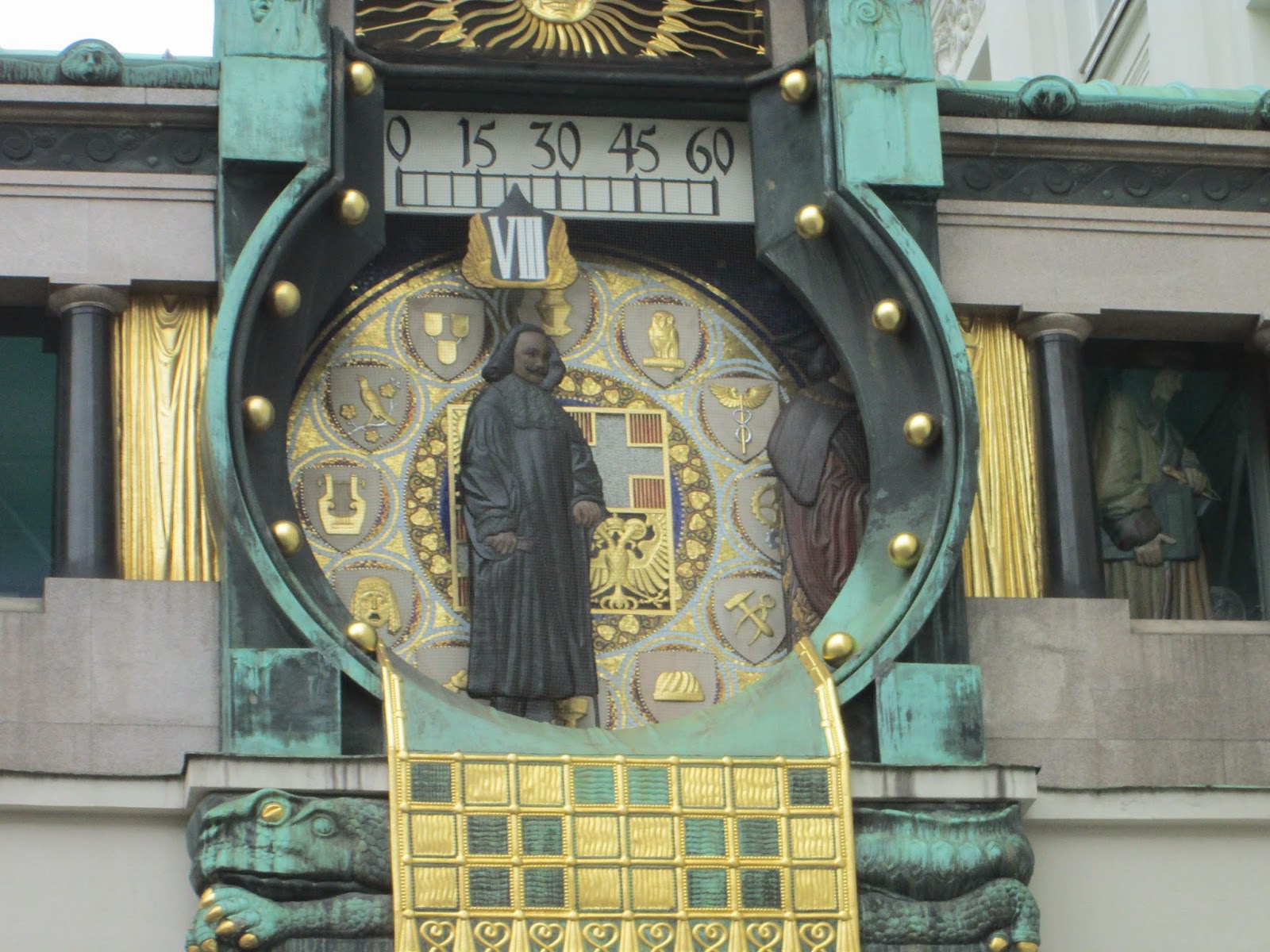 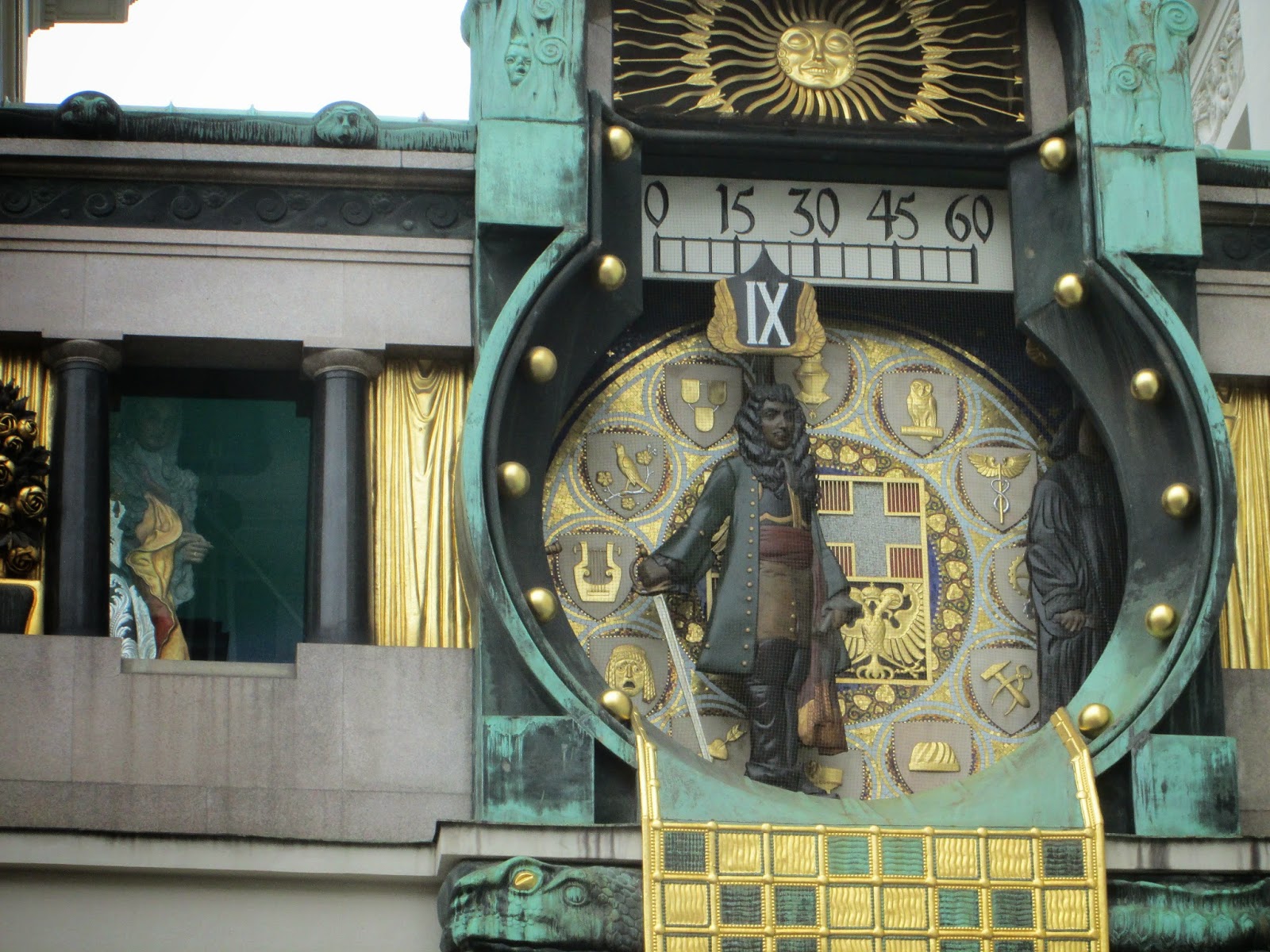 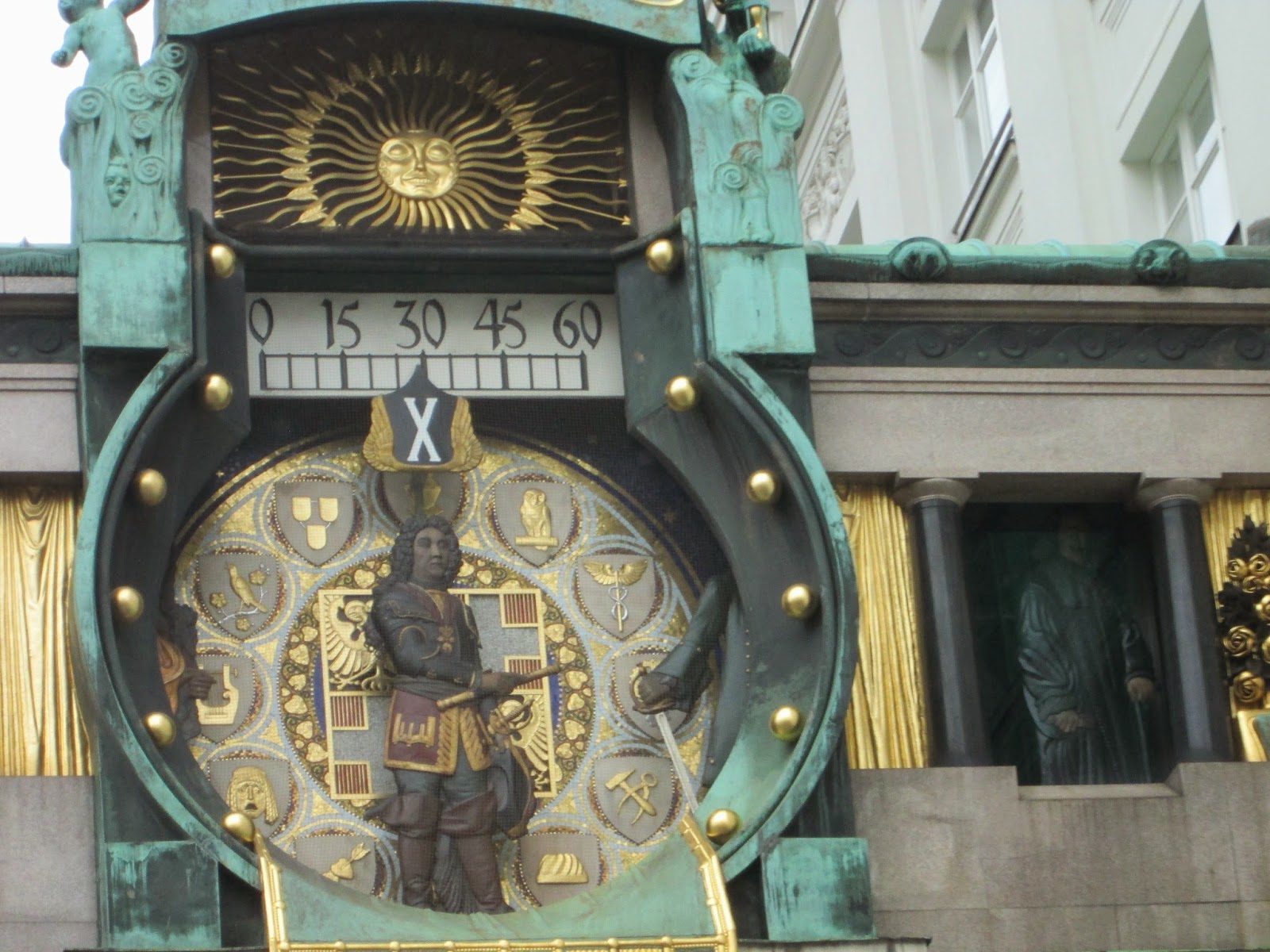 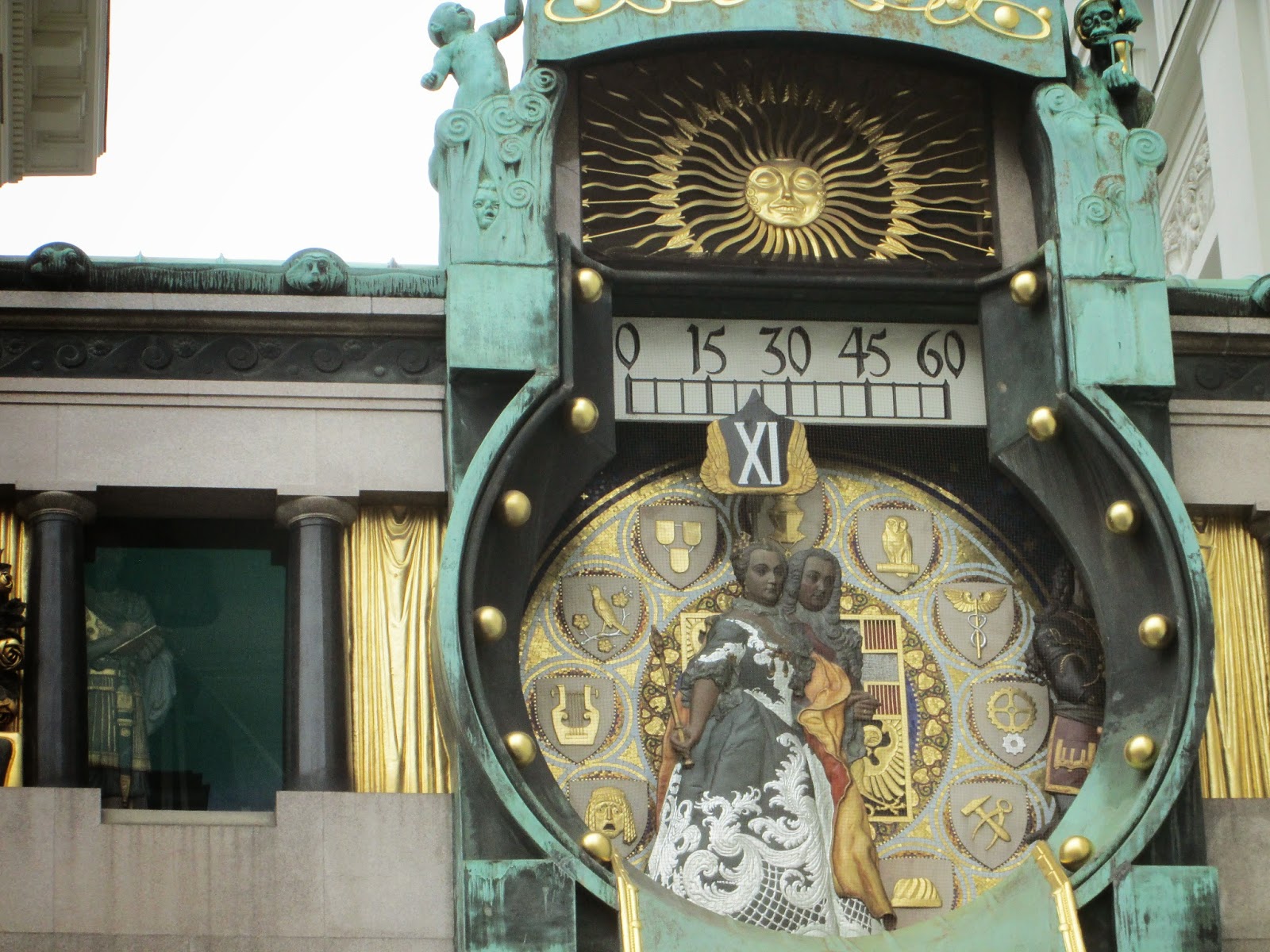 A Preview of Things to Come

I haven't posted much here lately for a variety of reasons.  I haven't had a lot of good material for one thing.  I have also been scrambling to finish a project.  Finally, Scott and I succumbed to a couple of icky winter diseases this past week.

Fortunately, though, I'm building up a goldmine of material to write about.  Here are a few picture previews: 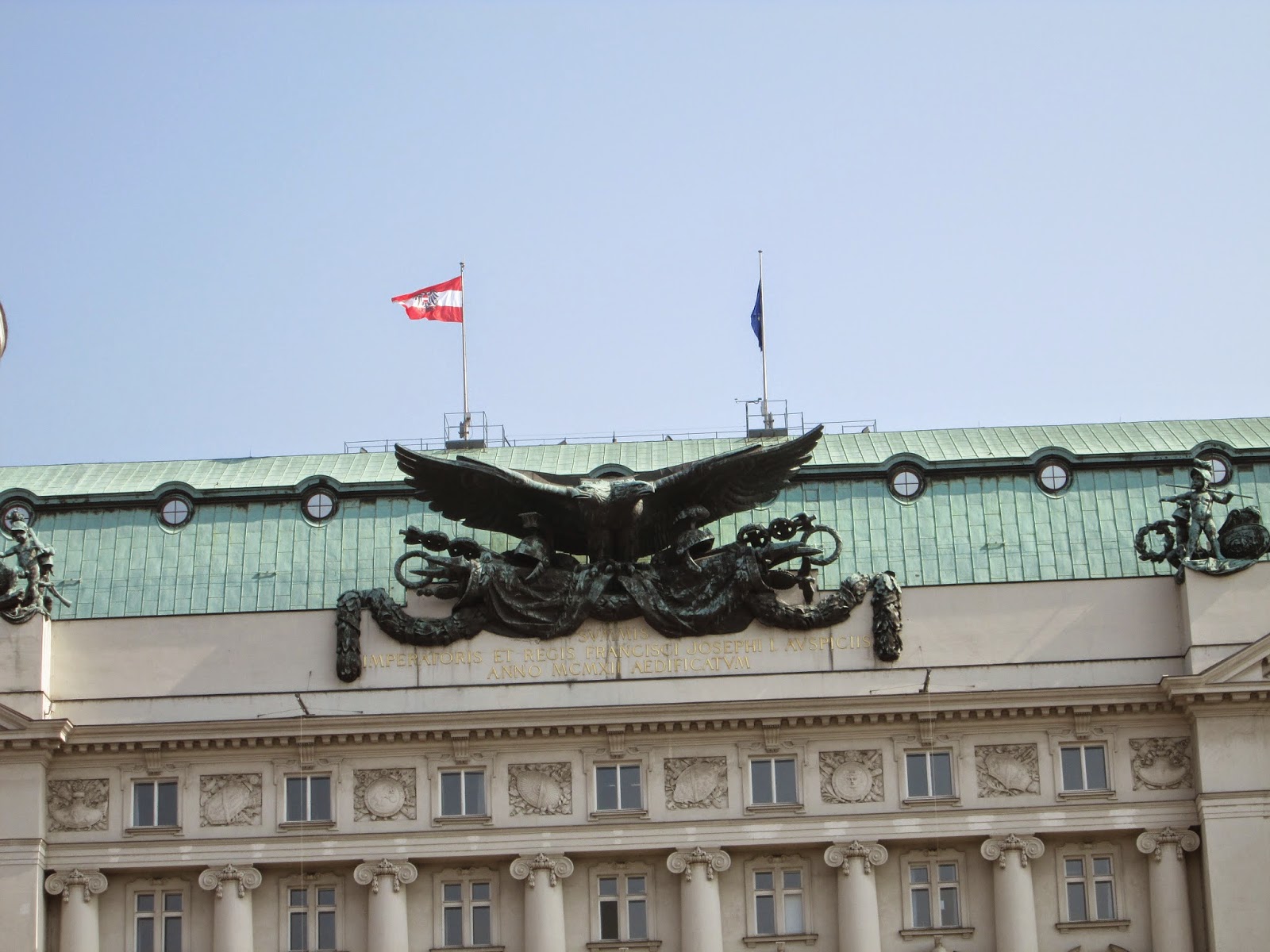 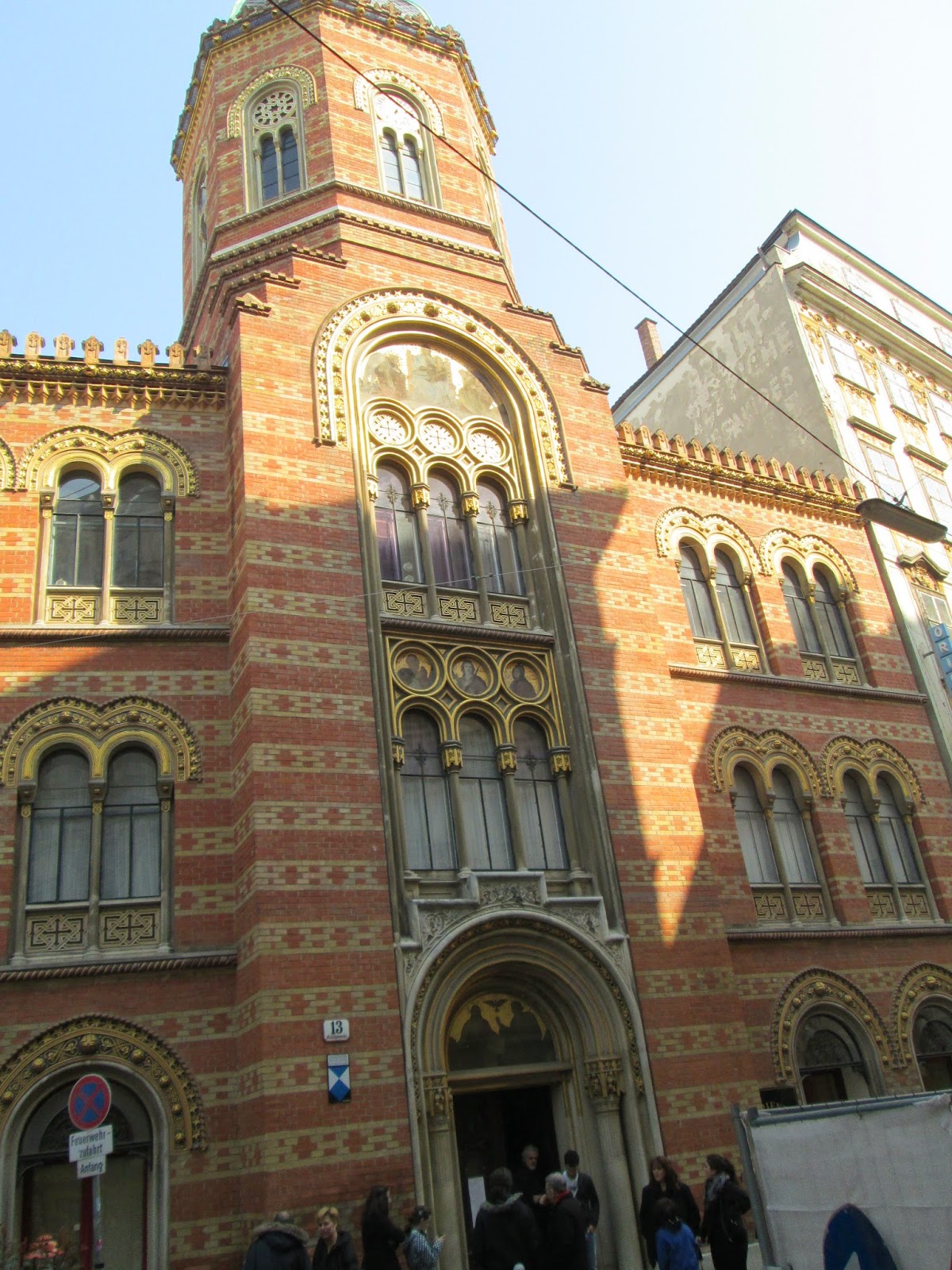 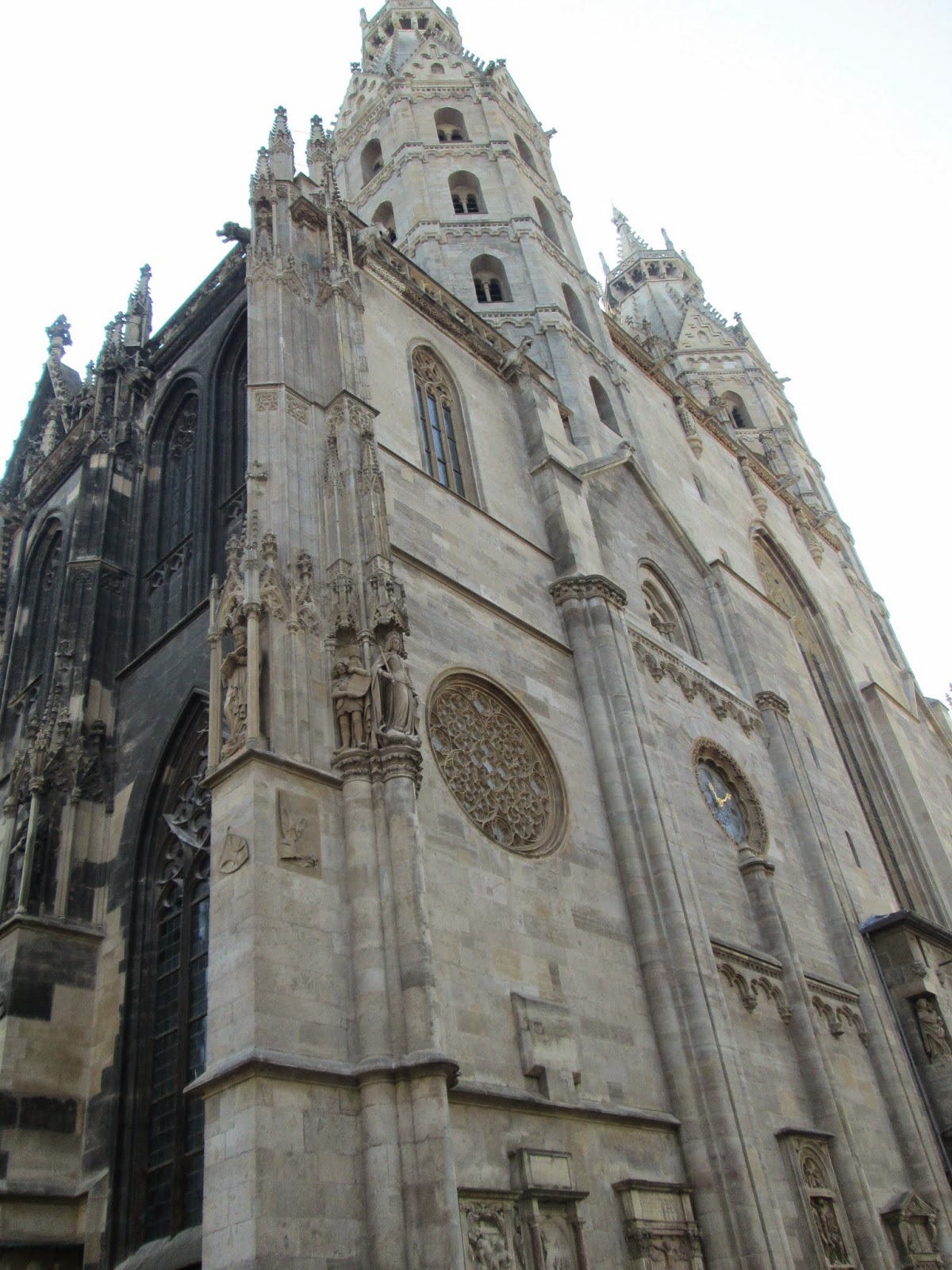 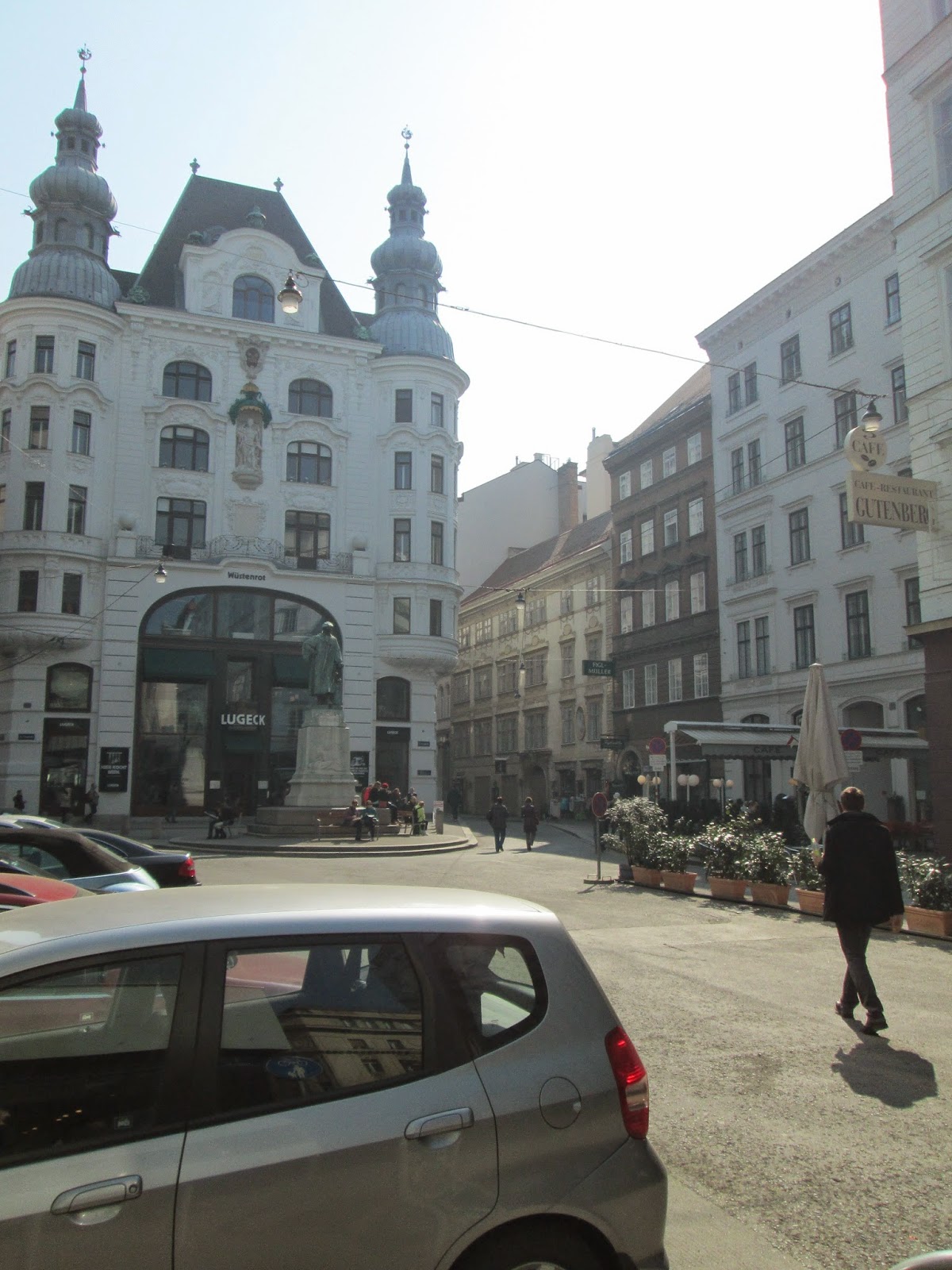 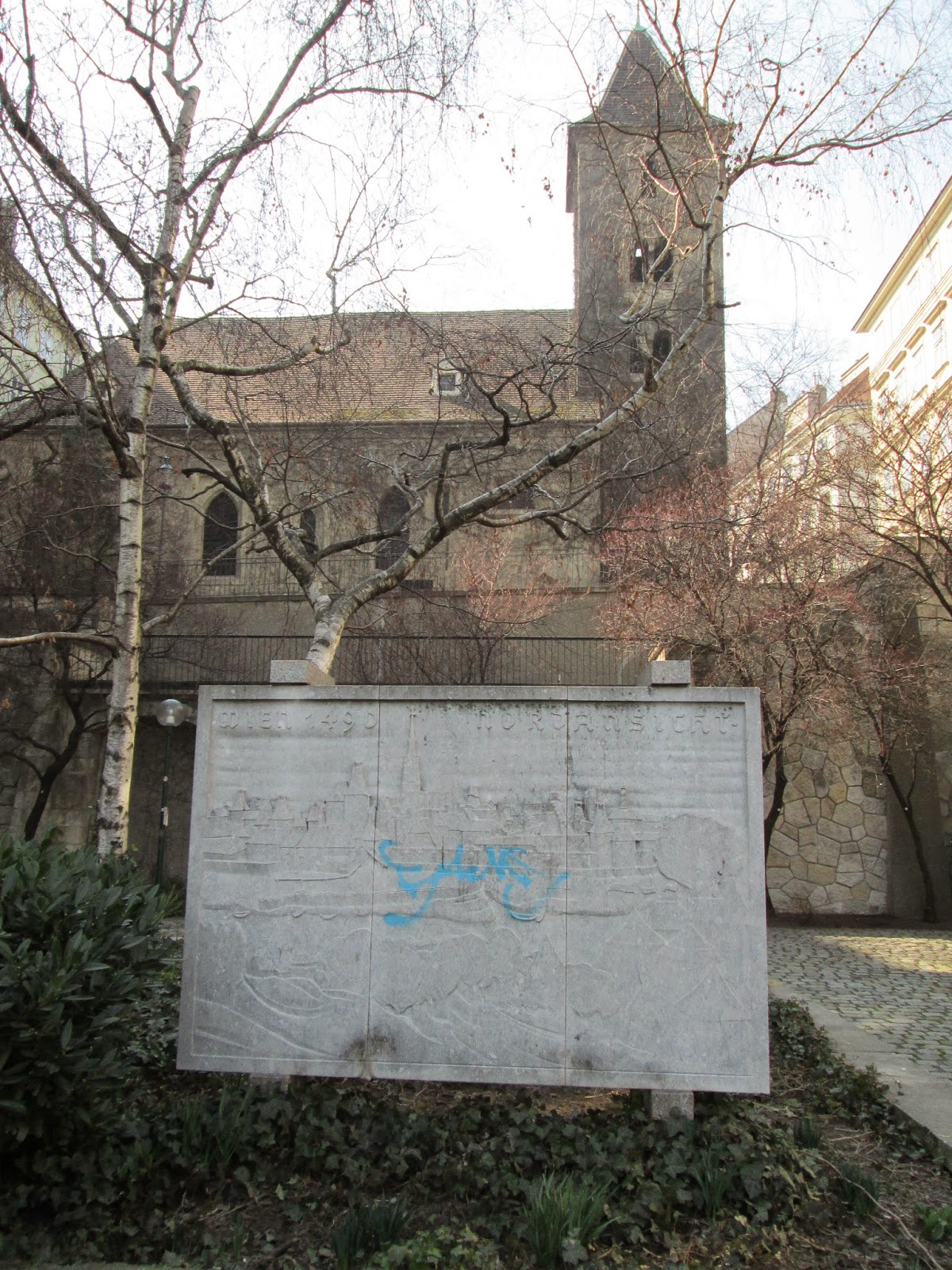 An Evening At The Opera

Last night, Scott and I went to the opera with some friends.  Neither of us is an opera buff by any stretch of the imagination (the last opera I saw was Aida when I was in Egypt in 2002!), but it sounded like a fun and interesting experience.  Plus, Astana has an impressive opera house, and we had been thinking for some time that we should see something there.

We saw La Traviata.  I looked up a synopsis of the plot online before we went, which gave me at least a vague idea of what was going on.  The singing was in Italian, which I expected.  There was a screen above the stage with translations in Russian and Kazakh (I'm thinking I can't really call this subtitling since it was above the stage?), but I couldn't do more than catch an occasional Russian word that way.  With the language barrier in place, I decided to become absorbed by the set and the costumes.  I was fascinated with the set.  They had a series of large cloths on the floor of the stage, and a large mirrored panel that was angled to reflect the designs on them.  This had the effect of showing the audience both the design on the cloth and the actors and actresses at different angles.  When they needed a new set, they just retracted the cloth on top and the next one in the pile was reflected by the mirrored panel.

A couple of cultural observations on the evening:  The powers that be at the opera house were absolutely insistent upon everyone checking their coats.  Scott and I were reluctant to do so, for fear of an unruly, pushy mob at the coat check and a late night when we had to teach at 9 AM the next day.  However, the pleasant surprise was that coat collection was actually orderly and efficient after the performance.  Kudos to the opera house for creating order out of a task that could easily be prohibitively annoying!

Another observation relates to cameras.  At performances in the US, I'm used to someone making an announcement about how use of cameras is prohibited.   Here, no announcements of any kind were made, and some people in the audience used their cameras with what I found to be somewhat distressing lack of inhibition.  Toward the end of the performance, the large paneled mirror that had been used to reflect the set was slowly moved to first reflect the pit orchestra, and then the audience.  This had the effect of showing us the reflections of the camera flashes from the audience.  I was hoping after the first time that happened that people would be too embarrassed to keep taking photos, but no such luck.  I decided to laugh rather than cry.

Speaking of which, here are some pictures (but not of the performance!): 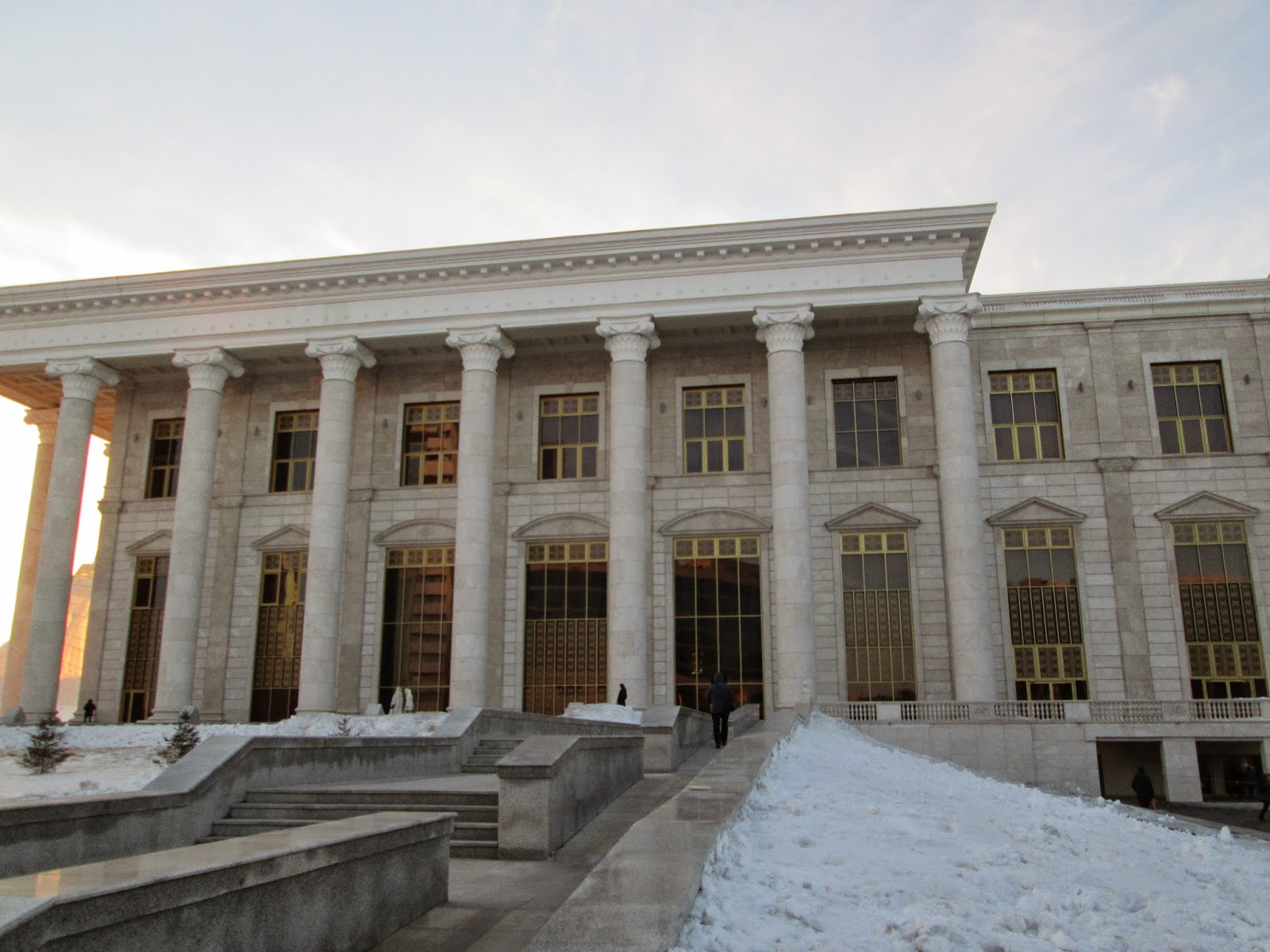 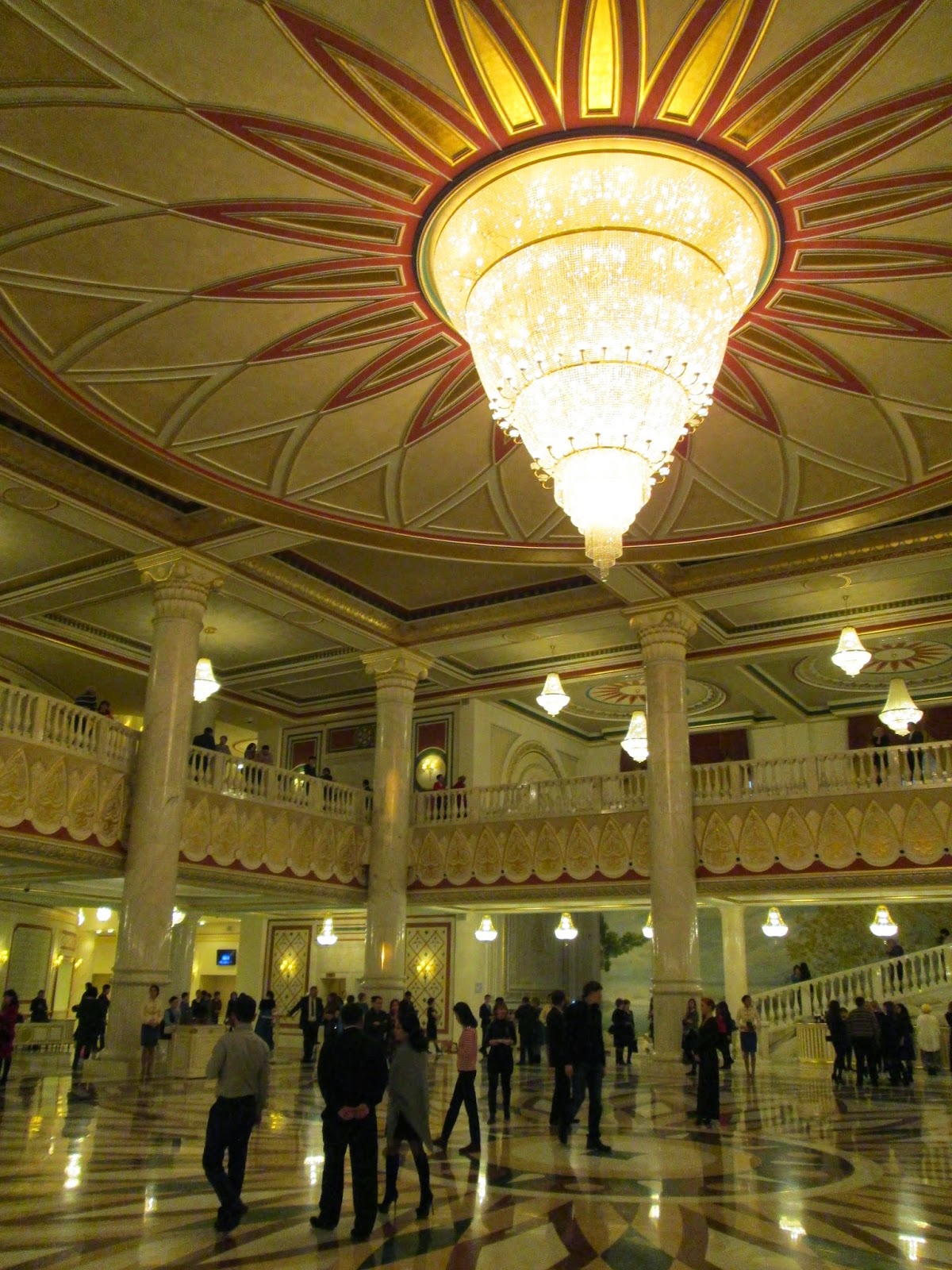 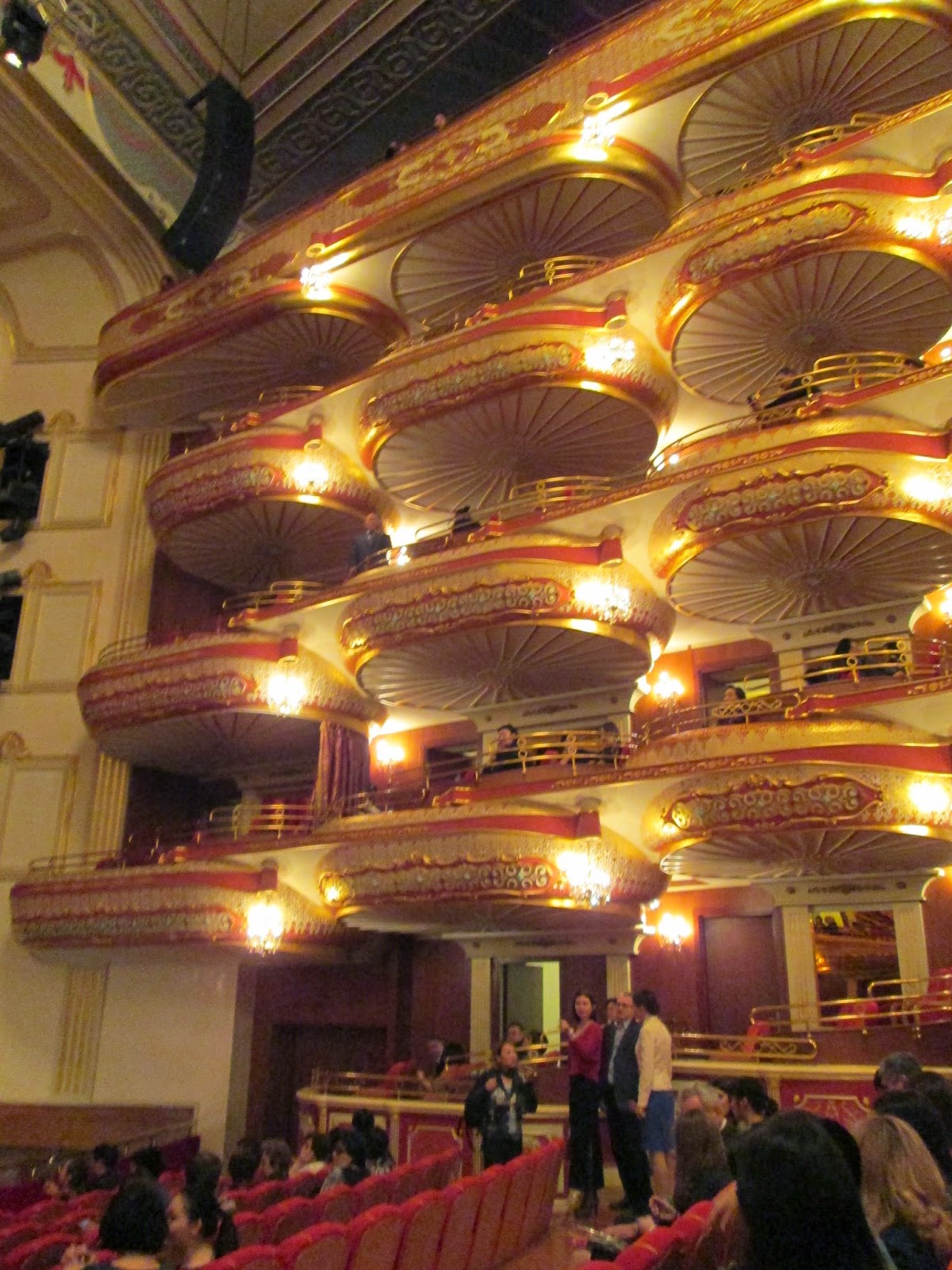 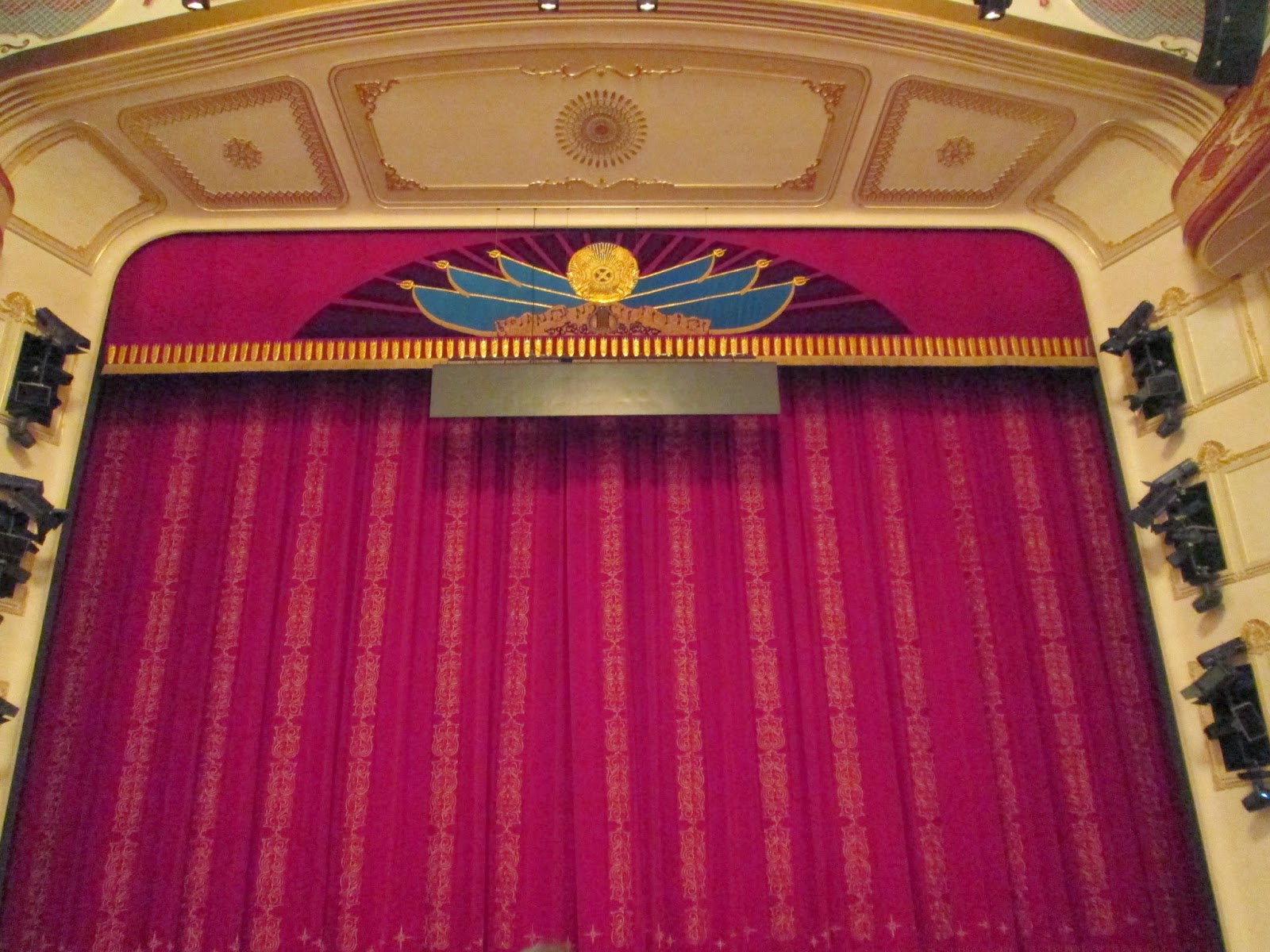