Pandemic Daze: What To Spend Money On When You're Not Traveling

Like many people who are fortunate enough to still have discretionary income, our spending habits have changed during the pandemic.  We've been sticking close to home since March (with the biggest adventure being moving to our new home in August), so travel spending in particular has decreased sharply.

In our pre-pandemic days, we went to New York City pretty frequently, at least once a year.  Every time we went, we discussed the idea of getting a cronut at the Dominique Ansel Bakery.  For the uninitiated, a cronut is a cross between a croissant and a doughnut, which debuted in NYC to great acclaim in 2013.  By "great acclaim," I mean long lines to get one.  While I imagine the line situation must have eventually subsided, we always concluded that we were too tired and stressed out to make a special trip out of our way (and probably stand in some sort of a line) to try a pastry.

I'm not sure at this point when we'll next travel to NYC (or anywhere else, for that matter).  But a few weeks ago, when I was perusing the food section of the NY Times, I noticed a story about how the Dominique Ansel Bakery was going to start shipping cronuts, at least for a limited time.  Scott and I decided this was our chance to try them.  I signed up for emails to alert me when they were ready to start taking online orders.

I saw the first alert email about 20 minutes after it landed in my inbox; I clicked on the link and found the cronuts had already sold out!  About two weeks later, I got a second alert.  I was faster that time, and managed to land a box of four cronuts.  I got a bit of sticker shock when it came to shipping, however.  Overnight shipment for the cronuts ended up costing nearly as much as the cronuts themselves!  I considered dropping the whole idea at that point, but felt like we were already too intrigued by the idea of ordering cronuts.  Plus, we hadn't been spending money on travel.

The second surprise was that even after ordering, we had about a two week wait to receive them.  They finally arrived late yesterday afternoon.  Here's what we got: 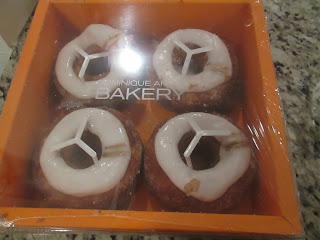 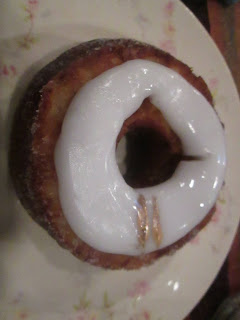 According to the literature they sent with the cronuts, flavors change every month, and are never repeated.  Our particular cronuts are filled with chestnut ganache.  And they are delicious!  But, I probably won't order them again.  There's the expense factor, of course.  Also, as delicious as they are, they are almost certainly better fresh from the bakery, as all fried foods tend to be.  It also turns out that four cronuts is a lot for two people--they aren't huge, but they pack a powerful punch and sit like lead weights in the stomach.  Of course, one day when we aren't social distancing, it may be easier to go in on a box with two other people, thereby limiting both the expense and the calories.  But I think in the future, I might be more receptive to visiting the bakery in NYC, whenever I may go again.

Posted by Hannah at 9:02 AM No comments:

The Cliche Of The Lost Sock

So many jokes have been made about missing socks, especially the notoriously hungry dryers that eat them.  However, the lost sock joke is on us right now.

Hardly a week goes by in our new place without Scott or I having to search for a lost sock.  Sometimes the missing sock is found clinging to other clothing, which, or course, could happen anywhere.  But part of the problem has to do with our current laundry configuration.

We have a small stackable washer and dryer that sits in a small space sandwiched between the wall of a closet and our hot water heater.  The small size means that we do smaller and more frequent loads of laundry, which means that sometimes we'll find the "missing" sock in our next load.  Socks also sometimes fall by the side of the washer/dryer unit.  It's hard to see when this happens, and retrieving these lost socks involves the use of a flashlight and one of those grabber tools (which, tellingly enough, the previous owners were kind enough to leave for us!).

I lost a sock yesterday.  Unfortunately, it's a sock I like.  In recent years, I've upgraded my socks, and no longer buy the sorts of multipacks that you can find at places like Target and Walmart.  My feet are more comfortable with the nicer socks, but naturally, losing a more expensive sock seems like a bigger problem than losing a cheap sock which probably didn't have long for the world anyway. I looked through my hamper and carefully checked all the clothing that went into the dryer with it.  Nothing.  I looked along the sides of the washer/dryer with a flashlight and still didn't see anything.

In desperation, I started running the grabber tool along the sides of the washer/dryer to see if I felt anything soft.  I did!  I grabbed it and pulled it up...only to find that it was a sock that didn't belong to either me or Scott!  It was a colorful sock with owls printed on it, the sort I would remember if either of us had a pair.

I'm hoping my sock will turn up soon, so that I can use it, but I'm cheered to think that it's probably not lost forever, at least.

Posted by Hannah at 1:36 PM No comments:

Email ThisBlogThis!Share to TwitterShare to FacebookShare to Pinterest
Labels: oddities

Getting Rid Of The Boxes

Finally buying a home after years of renting has felt very liberating.  We've had so many addresses over the years, some of which we stayed in for a long time, and some of which we stayed in for just a few weeks.  The common denominator was always that I knew we would be moving on.  I know there are people who rent for their entire lives for a variety of reasons, but I always knew that we were ultimately looking to buy someplace, once we knew where we were going to be for the long run.

"Moving on" is of course a euphemism for sorting all of your worldly possessions, filling trash bags, making multiple runs to donation centers, and, of course, packing boxes.  In my experience, way more boxes are needed than you think, and if you have to buy them, they can be expensive.  When we moved in to our last place, we kept some of the moving boxes that didn't get too beaten up.  We flattened them and hid them in closets and under the bed.  We did this primarily because we didn't know how long we would be staying there, but in the end, we stayed for four and a half years.

There are also the boxes that come with large pieces of styrofoam that are perfectly contoured to cushion whatever item was stored in it.  We kept quite a few of those, too.  After all, we wanted to protect our sewing machine and food processor in transit, didn't we?  Naturally, these boxes take up much more space than regular moving boxes, since the styrofoam can't be flattened.

Then there are the reusable sorts of boxes--the plastic storage boxes and the suitcases.  We had quite a collection of the latter, owing to our time working in Kazakhstan.

Anyway, one liberating aspect of putting down roots is that we got rid of nearly all the boxes we had been holding onto!  The moving boxes were the first to go, and we got rid of them as we unpacked them.  Then we got rid of the boxes with styrofoam.  I felt almost arrogant throwing them out--how did I expect to pack these items for the next move?  But there may or may not be a next move; what we have very definitely right now is limited closet space.  The last ones to go were the plastic storage boxes and the suitcases.  We did a purge of possessions so that we would need fewer plastic storage boxes.  As for the suitcases. we almost always do carry-on when we travel.  We kept our carry-on suitcases, one large suitcase to share as needed, and a duffle bag that folded up into the suitcase.  All told, it's probably still more suitcases than we truly need (especially at the moment, when we're barely going anywhere at all!).

I must be in for the long haul with this home.  At this point, I couldn't pack up even if I wanted to.

Posted by Hannah at 8:34 AM No comments: