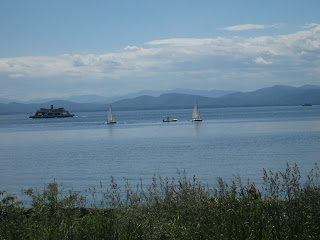 A seagull decided to investigate our shoes, which we left on the beach. 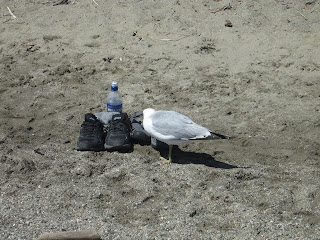 Still there.  I didn't think our shoes smelled great, but do they really smell bad enough that the seagull views them as a potential food source? 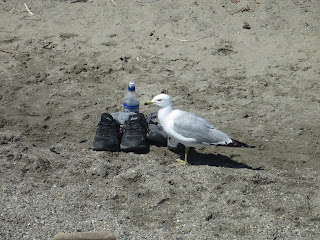 And he finally walks away, greatly disappointed. 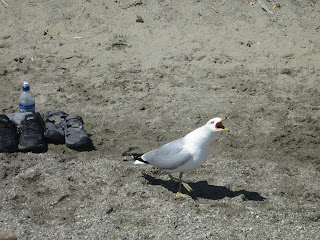 Posted by Hannah at 9:17 AM No comments:

Email ThisBlogThis!Share to TwitterShare to FacebookShare to Pinterest
Labels: animals, US travels

I actually experienced this fun triumph a couple of times in the past several weeks.  The first time was when I found a pair of earrings I'd been looking for since shortly after we moved back to the US from Kazakhstan.  I had pretty much concluded that I must have somehow left them over there, since that was the last time I had worn them.  It wasn't a huge deal--these were earrings I had made, and I could have made another pair, but I just didn't feel like it.  And I kept thinking that maybe they would show up.  Anyway, after all this time, I found them mixed up in some bracelets!  (Yes, it's entirely possible that I have more jewelry than any reasonable person needs).

My second recent experience with finding lost earrings is more interesting.  I signed up to participate in an study on campus involving an EEG to help advance the cause of science to get paid $40.  I lost and found an earring while in the process of washing my hair in the sink afterwards.

Let me back up a bit.  I participated in another EEG study a couple years ago also to advance the cause of science to get extra credit in a class I was taking at the time.  From that experience, I knew I would end up with gel in my hair.  But I remember it not being all that much gel.  I seem to recall the researcher giving me a couple alcohol wipes to get the gel out of my hair afterwards.  I remember that these wipes didn't remove all the gel, but they removed enough that I didn't feel too self-conscious when I went to class afterwards.  So when the researcher I worked with last week showed me that they had shampoo, conditioner, a comb, towels, and a hairdryer to deal with my hair after the EEG, I just assumed that everyone else who had participated was exceptionally fussy about their hair.

After the researcher removed the cap with all the electrodes, I discovered that my hair from about my forehead to the top of my ears was saturated with gel.  And I had six hours of class to attend before I could go home and take a shower.  I don't feel the need to look nice for my classmates, but I have some sort of standards for appearing in public.  So I found myself bent over the sink, working hard to rid my hair of the excess gel.  The gel didn't come out with just water...so I had to use shampoo.  Then I had to use the conditioner so my hair didn't get horribly tangled.  In the process of all of this, I heard what sounded like a small metallic object fall.  I checked for all the jewelry I had worn in.  Everything was there except for half of one earring--the backing was still somehow adhering to the back of my ear lobe, but the earring itself was missing.  These weren't expensive earrings, but they were earrings I liked--small silver earrings shaped like fish bones.  I was proud of the fact that I had had them since high school and still sometimes wore them.

I started looking around the area frantically.  I tried to peer down the drain, fearing that was probably where it landed.  I spent several minutes doing this, and almost gave up, thinking I could ask the researcher to let me know if she found an earring.  But then, just as I was giving up, I saw something small and shiny next to the baseboard.  To my relief, it was my earring.

I feel like there should be some lessons for me to share about this experience, so I'll give it a try:

Posted by Hannah at 7:58 AM No comments:

We have a new-to-us professor for one of our summer classes.  He wanted to learn more about us, so on the first day of class, he had each of us stand up in front of the classroom and answer questions from our classmates for 60 seconds.  I wondered what questions I'd be subjected to, and hoped none of them would be too awful.  The first question I was asked wasn't awful, exactly, but it was interesting:  "What was your maiden name?"

My classmate looked startled when I told her I'd kept my name when I got married.  Then the next couple questions I got (from another classmate) were about Scott.

I'm not expecting my classmates or anyone else to show interest in any specific areas of my life.  But since I personally believe there is much more to my life than my marriage, I found it telling that that was the area at least two people found the most interesting.

This incident made me think back on a t-shirt I saw in the window of a bridal shop some time ago.  The slogan on the t-shirt was "Pour me some bubbly, I'm getting a hubby."  That slogan made me cringe at the time for reasons I couldn't fully articulate at the time.  But I realize now that what I find so distasteful about it is that it's treating marriage like an achievement.  To be clear, I think that happy marriages are a wonderful thing and that weddings can be celebrated as a joyous occasion.  But treating them like an achievement brings to mind images of people training for some sort endurance event and carrying spears to hunt a spouse and bring him/her home as a trophy.  I also feel that the "marriage as an achievement" burden falls particularly heavily on women--no matter what else you do with your life, nothing quite lives up to getting your M.R.S.

With both marriage and parenthood, there is a lot of luck and timing involved.  Luck and timing are just that--luck and timing.  They may be joyous occasions, but they are not achievements.  Treating them as such implies that people who don't get married or don't have children are lacking in ambition or talent.

I've come up with some t-shirt slogans of my own to replace that cringe-worthy "Pour me some bubbly, I'm getting a hubby."  I think they may be particularly useful for women, whose true achievements that they have worked for often fly under the radar.  But men may feel more pressure by these cultural ideas than I realize, so I've created ones that should work for everyone:

Start a commotion, I got a promotion.
More champagne for me, I got my degree.
Bask in my glory, I published a story.

Scott came up with an additional one:
It's no longer a prob, cuz I got a job.

The more milestones to celebrate, the merrier.