Over 40 years ago, on the day I was born, one of my aunts and her then-husband bought me a bottle of wine.  They used the label on the bottle as a sort of gift tag, so it was easy to distinguish from any other bottles of wine my parents may have had around.  I think this is a clever gift for a baby, provided the parents have space to store it.  It spent decades tucked away in my parents' linen closet.

The one funny thing that nobody could have predicted is that I'm not much of a drinker.  I'm not a complete teetotaler, since I will drink, but I have a hard limit of one drink per occasion.  Often, on occasions when I drink, I'll do something like have half a beer and let Scott have the other half.  I like the taste of some alcoholic drinks, but they're not as much of a treat for me as some other things (like chocolate!).  I also don't seem to get the buzz that most people get from drinking.  And, even at my advanced age, I've never truly been drunk.  My recollection is that nobody remembered the bottle of wine by the time I turned 21 (which happened when I was studying in Mexico anyway), and even if anyone had, I wouldn't have necessarily made a beeline for it because being able to drink legally just wasn't that big of a deal for me.

It did resurface at some point, though, and my parents brought it up a couple of times when I visited.  Finally, maybe a year or two ago, they asked me to take it with me when I left.  I took it, and it sat on my kitchen counter.

Then we decided to move.  There is nothing quite like moving to make me thin out my belongings, and I decided that this bottle of wine shouldn't move with us.  So, I decided to give it a try...and it tasted really good!  I was surprised by how good it tasted to me, since as I said, alcohol is typically not a big treat for me.

We've been drinking small amounts of it with the chocolate we eat for dessert most nights.  The flavors go well together, and it's fun to think of people picking out a bottle of wine for a new baby.  I'm glad I'm getting to enjoy this gift at long last, after all these decades.

Pandemic Daze: The Triumphant Arrival Of The Chinese Toilet Paper!

Remember the early days of the pandemic, when a few people were hoarding massive quantities of toilet paper for the sheer joy of ensuring that nobody else had any?  As I wrote at the time, I wasn't initially concerned because timing had worked out so that I had just purchased a 24 roll pack of TP right before people started panic buying.  But as time went on, and we didn't see any appear on store shelves, we became more concerned.  At that point in time, we started looking online more regularly.  Scott lucked into buying some TP made by American brands and shipped from somewhere in the US that arrived reasonably quickly.  But before that happened, I ordered an unfamiliar brand of TP from China.
This TP was slated to arrive anywhere from April 24 to May 15.  That window passed.  Several weeks thereafter, I contacted the seller, asking for my money back.  The seller got back to me, and essentially pleaded for me to not demand a refund, saying that they had given my package to the international courier a long time ago, and citing imminent financial ruin if they had to refund my money.  They promised to send me a second package of TP in return.  I grudgingly agreed.  I didn't know if their tale of financial woes was legitimate or not, but given the state of things, it seemed plausible.
Many more weeks passed, but this long-awaited TP finally arrived on Monday!  I was surprised when I saw the package.  Given that it came from China, I couldn't think what else it could be, but it seemed awfully small for 24 rolls of TP.  Then I opened it, and found 24 weird, adorably tiny rolls.
Here is a picture of one of the rolls next to one of our regular rolls for scale: 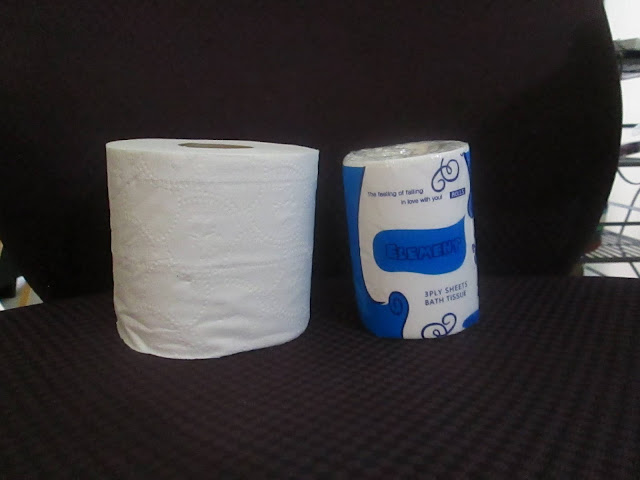 And check out how large its cardboard tube is: 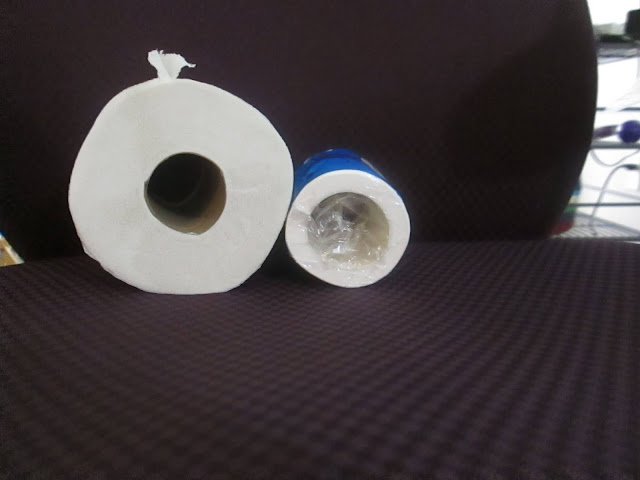 If nothing else, this Chinese toilet paper is providing me with good entertainment, and I think the individually wrapped rolls will make halfway decent packing material for our probable impending move.  After that, I suppose we could try using it for its intended purpose, or maybe distribute the rolls as pandemic gag gifts.  Either way, I got a kick out of receiving a package I had long ago given up on.
Posted by Hannah at 11:50 AM No comments: