What We Eat When Nobody Is Watching

This may be wishful thinking on my part, but I think everyone must like a particular food, or combination of foods, that other people find odd.  The food combinations I like for which I've received the most grief commentary are bananas with cheddar cheese and peanut butter with dill pickles.

I never thought bananas with cheddar cheese was such an odd combination, but my roommates my freshman year in college set me straight on that when they saw me eating it.  And, truthfully, even though it's a delicious combination, I don't know of other people who eat it.

My latest odd inspired combination, which I finally tried yesterday after wondering about for a while, was peanut butter with Sriracha sauce.  I had it on a rice cake, and the flavor was somewhat reminiscent of Thai food, while being quick enough to put together to provide instant gratification.  Scott witnessed this, and promises he'll try the combination...sometime.  I'm now trying to decide which other unsuspecting friends and family members I should try to bring on board for this strangely delicious snack.
Posted by Hannah at 9:34 AM No comments:

Email ThisBlogThis!Share to TwitterShare to FacebookShare to Pinterest
Labels: food

And Then There Were Tomatoes 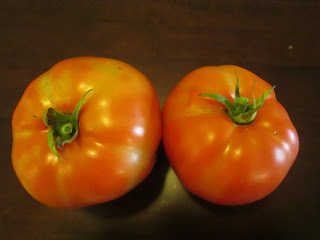 I wrote this summer about my (mis)adventures in balcony gardening.  Even though it's technically fall now, balcony gardening season has continued, courtesy of the unseasonably warm weather we've been having.  In my opinion, this is really the only upside to the weather at this point.  This summer was a challenging time for me, and I'm anxious to put it completely behind me and move on to fall.

However, the upside of continued balcony gardening has its own very specific upside.  I finally have tomatoes!  After a string of cherry tomato plants inexplicably died over the summer, I tried a beefsteak tomato plant.  It stayed alive, but it took a while before it did anything else, like grow taller or blossom.  However, now it's huge and full of green tomatoes!  Just in time for a first frost (if the weather were a little more fall-like)!

Eventually, three of them ripened, so I'm happy that we got to enjoy at least a few tomatoes from our plant.  At this point, I'll either be stuck with an extra long summer that refuses to move on (but plenty of ripe tomatoes!), or I'll get my wish for fall weather and learn to embrace fried green tomatoes.

Posted by Hannah at 2:53 PM No comments: