Our second day in London was really just a partial day, since we needed to take our train to Ipswich in the afternoon.  I was glad that we spent our first day walking all around because we thought that for our second day, we would be better off picking one activity that was fairly close to our hotel so that we could leave our bags in the morning and then pick them up before catching the train.

We spent our time strolling around Serpentine Lake and enjoying the calm atmosphere, flowers, and especially the birds.  We enjoyed it so much that we forgot to visit the Speaker's Corner.  Something to do on our next trip, I guess!

I'm no expert on birds, but I enjoy seeing them, and from my amateur perspective, the area around Serpentine Lake did not disappoint.  We saw ducks sitting on posts... 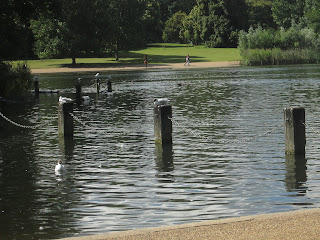 A kind of duck I had never seen before with a white patch on its head and a call that sounded like a bicycle horn... 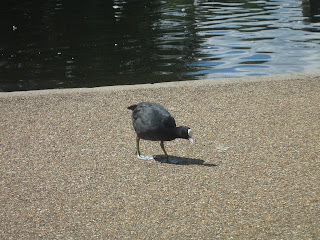 Swans and geese following a boat... 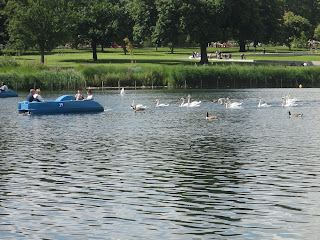 And  parakeets!  I saw them mentioned on one of those nature guides that parks often post, and hoped we would see them.  When Scott said he saw a lime green bird out of the corner of his eye, I knew we were lucky.  Unfortunately, I was not nearly as lucky in my photos of them. 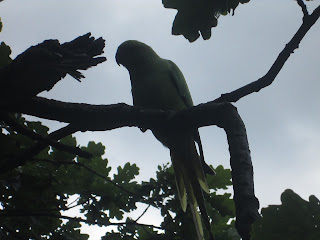 They were fun and unexpected to see.  Some people were encouraging them to land on their heads, which I, for one, was not brave enough to attempt.  I think what I read later was that the species is native to the Himalayas, and can thus withstand the cooler temperatures in England.

After Hyde Park, we ate lunch at a Lebanese restaurant and headed back to the hotel to grab our bags and catch a cab to the train station.  It was a pretty near thing that we made the train; traffic was horrible.  Our driver was friendly, though, and did his best to get us to the station on time.  He was curious about where we were going.  When we told him we were going to Ipswich, he thought that was an odd place for tourists to go.  Fortunately, I ended up being pleasantly surprised...
Posted by Hannah at 6:56 PM No comments:

What Would You Wear?

I just realized how long it had been since my last post.  Good heavens!  I had hoped by this time to have organized my photos from England and finished writing about the trip, but I've been alternately busy and sick for the past few weeks, a seemingly lethal combination for my ability to blog.

Anyway, this week, I have been seeing stories about the Egyptian and German women's volleyball teams at the Olympics.  Specifically, articles such as this one show the juxtaposition of an Egyptian volleyball player wearing long pants, long sleeves, and a hijab, while the German player is wearing a bikini.  It seems reactions to photos of these volleyball players have ranged from people citing them as evidence of a massive cultural divide to people citing them as proof of sports as a cultural bridge.

I have traveled and lived in several predominantly Muslim countries, and seeing these photos made me think of how many times over the years people have asked me what I wore while I was in those countries (or sometimes told me what I must have worn without actually asking).  For reasons I have never understood, the hijab provokes very strong feelings among some people.  To give everyone an idea, I have been asked far more questions about what I wore while in various Islamic countries than I have about learning the languages spoken there, living under systems of government very different from our own, or even interesting things to see in the various countries.

Anyway, with that in mind, these are my thoughts on the subject:

1.   In the Muslim-majority countries where I have spent time (Jordan, Egypt, Syria, Lebanon, Turkey, Kazakhstan, and Uzbekistan) I went around bareheaded except when I visited mosques, or in the case of Kazakhstan, when the bitter cold made a hat necessary.

2.  I have gotten to know many Muslim women over the years.  In my experience, if a woman is wearing hijab, it means....that she's wearing hijab.  That's all.  Women may cover their heads for a variety of reasons, and the presence or absence of hijab indicates nothing about her intelligence, education, or "independence".

3.  When I read the BBC article I linked to above, the thing that appalled me the most was that female volleyball players in the Olympics were required to wear bikinis until 2012.  This seems discriminatory against women who may want to wear more clothing for religious or cultural reasons, as well as women who may just want their butts to be fully covered if they are going to be on TV.

4.  My everyday attire falls somewhere between what the Egyptian and German volleyball players were wearing.  That being said, if I were to play volleyball in the Olympics (Ha!  How's that for an unlikely scenario?), and had to choose between one of the two uniforms, I would opt for the Egyptian one.  Long pants and long sleeved shirts leave far less room for wardrobe malfunctions than bikinis do, in my opinion.

What would you wear if given the choice between those two uniforms?
Posted by Hannah at 8:22 PM No comments: