Hmm.  Well, I know I hadn't posted in a while, but I didn't remember how long it had been!  In a nutshell, life has kept me busy.  I did ultimately start working again, but, having anticipated that it might not be a good long-term fit, kept some other application processes going.  Between my current job, interviews for other jobs, and paperwork associated with other opportunities, I've had a pretty full schedule.

This isn't to say that things have been all bad!  For one thing, I finally have a job offer I feel optimistic about.  Also...a couple weeks ago, a 5-pound box of mushrooms came into my life. 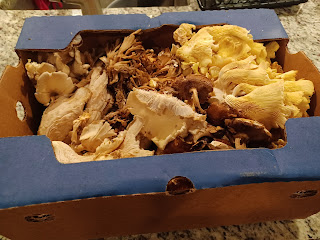 There is a mushroom vendor at our farmers market.  They sell a lot of small containers of fresh, pristine looking mushrooms.  I buy them sometimes, but mushrooms are somewhat expensive compared to some other foods, so I've never really gone all out on my purchases.  But!  They sometimes sell a 5-pound box of mushroom "seconds".  The first time I saw one of these at their stand, I was intrigued, but told myself that I didn't have the time or the plan to deal with quite so many mushrooms at once.  After we left, of course, I immediate regretted not having gotten it.  Then, the next time I saw one of these boxes, I had arrived about a minute too late, and someone else was buying it.  So, when I saw it again a couple weeks ago, I jumped to buy it and declared the next week "mushroom week."

Getting through all of the mushrooms was a fun challenge, but a challenge all the same.  I love mushrooms and will happily eat them for several meals a day, but I'm not sure Scott is quite as enthusiastic about them.  I finally got to try a recipe for dry rub mushrooms, which was interesting, but I might not try again.  I also got to make a tart absolutely laden with mushrooms, and more than one egg dish with mushrooms.

There will almost certainly be a next time for this mushroom venture, although I've promised Scott that I won't do it immediately.  Next time, I will make a mushroom stew recipe that my dad and I both found in the NY Times and marked for future reference.  Also, next time, I'll know that oyster mushrooms keep much better in the fridge than pioppino mushrooms and plan my order of consumption accordingly.

In the meantime, though, there is a large box of mangos I bought last week from an Indian grocery store to enjoy.