There is no delicate way to put this:  We have a bit of a rodent problem in our apartment.

I actually think mice are moderately cute, at least in certain contexts.  And our problem with them hasn't been terrible.  We've been seeing the scuttle across the floor occasionally, which is startling, but not life-altering.  I hadn't found mouse droppings or any evidence that they had been getting into our food, but I was concerned that we were on the clock for those sorts of problems to start.  Not to mention the problem of mouse reproduction.  I was imagining an army of baby mice chewing holes in cracker boxes and bags of grains from the supermarket bulk bins.  Ugh.

We had been thinking about getting a cat as a pet for a long time for the companionship and entertainment they bring, but it occurred to us that a side benefit might be some natural rodent control.  When we brought Laila home, I wondered what would happen.  On the one hand, she had spent some time as a stray, and had presumably caught rodents and/or small birds to eat.  On the other hand, she is so small and wobbly.  Once she started regaining her strength and playing more, though, I became optimistic.  Seeing her brutalize her toys made me think she still had that feline drive to hunt and kill things.

Well, it turns out that killing her toy spider repeatedly was just practice for the real thing.  When I came home from work on Friday, something looked different in the living room.  I realized that she either somehow acquired a new toy mouse, or....there was a dead mouse elegantly juxtaposed with the small Persian rug I brought back from Syria.

She's a very tidy killer, it turns out.  There was no blood in sight.  While I bear mice no ill will, I don't care to sustain a colony of them in my home.  Nor do I care to set lots of traps or try to poison them.  I'm very proud of our furry natural exterminator.

Posted by Hannah at 3:25 PM No comments:

Circle Of Life, From The Perspective Of A House Cat 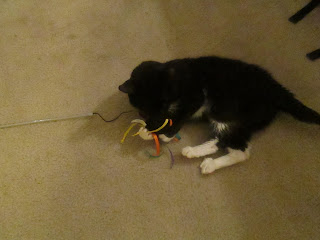 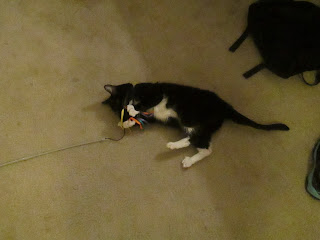 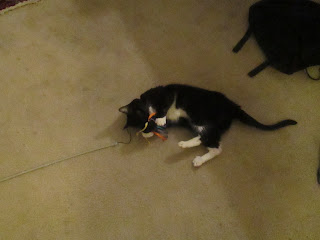 When your human drags a toy spider along the floor for you to chase, it is very important to make sure it is truly dead after you catch it.  The whole apartment would be infested with toy spiders if not for my vigilance and hunting prowess.  You're meowcome.
Posted by Hannah at 6:20 PM No comments:

I haven't posted in a while about anything I've made.  I was dragging my feet on photographing pieces, but I finally went ahead and photographed several today.

I inherited some of my paternal grandmother's jewelry when she died several years ago.  Today's piece of jewelry began with a fabulous fly pin that belonged to her. 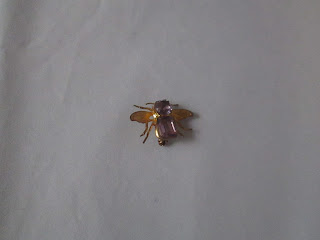 There is wonderful detailing on the fly's wings, which, frustratingly enough, the picture doesn't show very well.  It also has a purple body.  Purple is my favorite color, and it was my grandmother's favorite, too.  I thought it was an extremely cool pin.

The only problem is that I'm not really a pin person.  I think it may be a generational thing--I've seen lots of older women wear pins with a great deal of flair, but when I try it, it just doesn't feel like me.  Truthfully, I can only think of one woman around my age who I ever saw wearing pins on a regular basis.

So the pin sat unworn for a number of years.  I finally decided it was time to remedy that and make a necklace from it, since I wear necklaces very regularly.  I started by buying a bail to convert the pin into a pendant.  The bail is simply a piece of tube that goes over the pin back with a large loop on top.  You can get these bails with either a vertical or a horizontal tube, depending on the direction of your pin back.  My pin was thus turned into a pendant.

I thought just putting it on a plain chain would neither do the pin justice nor having pleasing proportions.  So the next question was how to design a necklace that would complement the pendant without overwhelming it.  Inspiration came in the form of a package of seed beads that came as a free gift with some other beads I had ordered.  The seed beads were a mix of soft purples and whites with a matte finish.  I thought the soft, matte beads would allow the pendant to really shine.  I also thought that using matte beads would bring the overall shine of the piece down a bit, and make it easier to wear for everyday occasions. 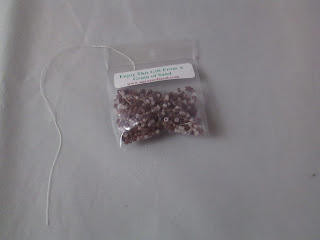 I also wanted to incorporate metal into the necklace, so I bought gold-filled chain, wire, cones and a clasp.  Gold-filled is a good affordable alternative to gold.  I shudder to think how much solid gold would have cost.  I made four strands of wire-wrapped seed bead links, and used cones to link them to the chain.  I then connected the clasp to the ends and slid the pendant on. 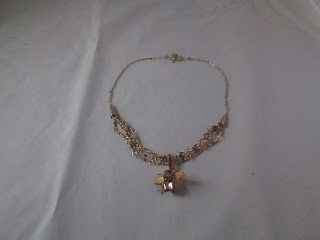 Since the loop on the pendant bail is so large, I can easily remove the pendant if I want to wear the necklace without it. 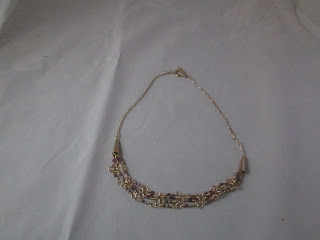 And, since I left the pin back intact, I could remove the pendant bail and wear it as a pin again if I ever wanted to.  I'm glad that in one form or another, the fly pin will get worn again.
Posted by Hannah at 11:09 AM No comments: 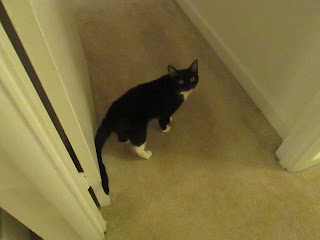 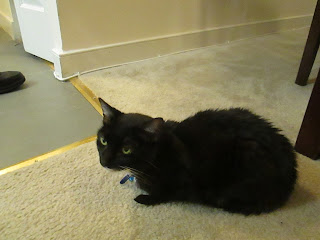 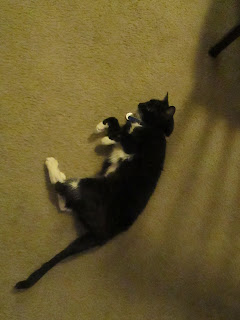 We brought her home from our county's animal shelter on Saturday.  Shelter staff had named her Oreo, but we knew we wanted to rename her.  For one thing, it seems silly to name such a skinny cat after a type of junk food.  A cat-loving colleague suggested that we name her Laila, which means night in Arabic.  We decided that she was indeed a Laila, and the name stuck.

I hadn't visited an animal shelter in many years, and Scott had never visited one at all.  Even though we knew in general terms what kind of cat we wanted (friendly, older, short-haired), there were still many to choose from.  It was quite overwhelming.  One of the staff told me they had even more cats elsewhere in the building who were not being displayed for prospective pet adopters.

In spite of a large selection, we narrowed our choices down to two, Laila and one other kitty.  We met with each separately in a sort of meet-and-greet room.  The other kitty was primarily interested in exploring the room, but Laila came right over to be petted.

She was silent on the car ride home.  I had her in her carrier on my lap, and she just kept turning around and looking out all the different mesh windows.  When we got her home and I opened the carrier, I expected her to run under a piece of furniture and hide.  But she was interested in exploring right away.

The shelter staff think Laila is 10 years old.  She's had a rough life, at least in parts.  She was found and brought in as a stray with a puncture wound that suggested she had been bitten.  Because of the probable animal bite, she had to go into quarantine at a cat foster home for 4 months.  She's very skinny and has a slightly wobbly walk.

She warmed up to us very quickly.  Generally speaking, when we're home and she isn't eating, she wants to be where we are.  Her preference is that we drop everything and pet her, but barring that, she's happy to hang out and watch us.  She wasn't eating much when we first brought her home, but is starting to eat more.  She also seemed to have trouble jumping very high, but she seems to improving and/or becoming more confident.  After I cruelly pushed the chairs under our kitchen table--to deprive her of a midway point to jumping on said table--I watched her defiantly jump to the table from the floor.

Laila has brought a lot of joy to our home, and we hope we can give her good golden years.
Posted by Hannah at 3:39 AM No comments: