Scott and I had such a great time being owned by Laila the cat that we decided to venture into cat ownership again!  Meet Stella, aka the Russian Blue Menace! 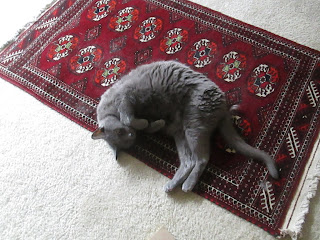 We adopted her from the animal shelter a couple weeks ago.  Just like when we adopted Laila, the selection process was pretty overwhelming.  Stella was found as a stray, but I think she was probably someone's pet at some point, judging by her insistence upon sleeping on the bed with us at night.  The shelter staff think she is about 7 years old.

This kitty has clearly had some trauma in her life.  The shelter staff--who move animals around all the time--had quite a time getting her into her carrier so we could take her home.  She then proceeded to throw her weight around, yowl, and pant the entire ride home.  I had never actually seen a cat pant before.

Fortunately, she calmed down once we let her out of the carrier.  But...it is generally agreed upon that pets should occasionally leave their homes for veterinary care.  At a bare minimum, our county (and I imagine, most counties) want proof of an annual rabies vaccination.  The shelter itself wanted us to get Stella a vet appointment within 7 days.  We decided to give her two weeks to settle in before attempting to take her anywhere.

The day of the first vet appointment came today, and of course, we had to try to get her in the cat carrier.  "Try" is the operative word here.  We failed after many attempts, and I had to call the vet's office in defeat.  I have a couple of souvenir scratches on my arm (she didn't swipe at me; I got them from her hind foot while she was trying to spread herself out so as not to fit into her cat carrier).  I just dropped a bunch of cash on Amazon ordering a larger pet carrier and some pheremone spray that is supposed to make the cat carrier seem more calming.

Wish us luck.  We rescheduled for next Friday morning. 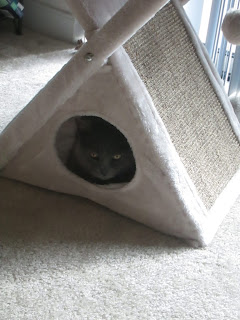 Posted by Hannah at 9:26 AM No comments: