Aleppo From A Different Time

I first visited Syria in 2001.  I was studying in Jordan that summer, and during a mid-program break, I traveled to Syria with some of my classmates.  Aleppo was my first real introduction to the country, as some of my classmates had spent time there previously and were eager to show everyone around.  This was a bit of a trek to undertake, particularly in the summer.  As I recall, we took taxis over the Jordanian-Syrian border and into Damascus, where we hired a minibus to take us to Aleppo.  The trip from Damascus to Aleppo took about 5 hours, which is a lot during the hottest part of the summer!

I loved Aleppo.  We went to a Turkish bath, ate lots of tasty food, explored the Citadel, and shopped in the souk in the old city.  Imagine being 21 years old and sitting at a cafe at the base of the Citadel at night with a bunch of friends.  I thought life couldn't get much cooler than that.

On the way back to Jordan, I visited one of the Crusader castles and Damascus.  That brief trip made me determined to return to Syria one day, and I did.  I studied in Damascus between 2004 and 2005.  I made a couple of visits to Aleppo during that time, including one with Scott.

For a long time, Aleppo meant adventure and fun for me.  It still does have those associations for me, but now they are mixed with the images I am seeing now of civilians evacuating the city and the stories I have been hearing about terrible violence and suffering.

I don't know what the answer was in Syria, or if there ever was an answer.  I do wish with all my heart that the international community--if we believe such a thing truly exists--had known what to do and had the will to prevent this tragedy.  I cannot imagine and hope I never experience the loneliness and hopelessness of being trapped in an area with regular bombings, a dwindling food supply, and little medical care.  Syria--and maybe Aleppo in particular--has received a good deal of news coverage, unlike many tragedies unfolding in the world.  I wonder sometimes how much the news coverage has helped the people there.

In a way, I feel very selfish bringing my own feelings into this situation because they don't matter.  My feelings one way or another won't do anything to change the situation or save any lives.  But I will say this:  Watching from afar as a beloved vacation spot becomes synonymous with death and destruction gives me the sobering reminder that no person or place is immune to tragedy.  Of course, I hope with all of my might that nobody ever has to experience such tragedies again.  But it will certainly happen.  I hope that if we can imagine this type of scenario happening to a place we know or people we love, then maybe we can keep our hearts open to the people currently trapped in terrible circumstances.

Posted by Hannah at 8:25 PM No comments:

Email ThisBlogThis!Share to TwitterShare to FacebookShare to Pinterest
Labels: Syria


I wrote recently about Laila's aversion to bedtime and compared her to young human children.  Well, it turns out that's not the only thing the two species share!  It turns out Laila is also a picky eater.

When we first brought Laila home, her appetite was generally pretty light.  We took her to the vet within the first week, and he was concerned about how skinny she was.  He wanted us to try to encourage her to eat more, and he recommended a high protein prescription cat food.  He said it was made of things like venison and potatoes.  As far as cat food goes, it sounded pretty tasty to me.

We bought three cans of this liquid gold at $4 apiece.  When I first served it to Laila, she ate it with apparent enthusiasm.  I set about trying to find it online for cheaper.  Ultimately, I found it for less, got the vet to fax the prescription to the company, and received a shipment of 24 cans.  I figured we'd be set for a while.

And, for a while, we were.  But then I started to notice Laila eating less and less of the canned food I offered her and eating more of the dry food I leave out as a supplement.  I wondered if she was starting to prefer dry food.  But then, one day, I fed her some of the canned Meow Mix that our vet told us was like cat junk food.  She ate every morsel of that.

I'm guessing that she may have just gotten tired of her prescription food.  I still have a number of cans of it left, though.  Right now, I'm alternating those with other types of food.  And, in order to try to trick her into eating some of her prescription food, I put Meow Mix--with its chunks of mystery meat and foul looking gravy--on top.  This must be the cat equivalent of crumbling a bunch of Cheez-Its on top of a lobster tail.

Interestingly, the other day, I fed her a new type of canned cat food.  It was a higher end brand and made of salmon and trout.  Much like her prescription food, it sounded relatively appetizing....

She wouldn't even try a bite.

We're very curious how she survived as a stray cat before she was brought to the animal shelter.  Since we'll never know, I just have to laugh and compare her to the small children I've known who adhere to diets of only white foods or eschew all veggies.
Posted by Hannah at 5:49 PM No comments: 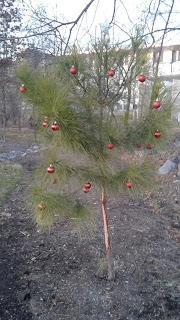 I see this great little tree on my way to and from work every day.  I love that someone took the time to decorate it!  A little extra cheer was particularly appreciated today, since the fire alarm in our building went off at about 3 AM, forcing me, Scott, and Laila to go outside in the cold to stand around.  The good news is that our building didn't actually burn down; the bad news is that those of us who don't have the luxury of taking catnaps all day long were very tired.  I was glad to be reminded of what a fun time of year it is.
Posted by Hannah at 5:38 PM No comments:

Email ThisBlogThis!Share to TwitterShare to FacebookShare to Pinterest
Labels: US living

Scott and I are seldom early adopters of new technology.  We didn't get our first smart phones until 2013.  Those phones traveled with us to Kazakhstan and back and used four different SIM cards (with four different phone numbers) each.

When we returned from Kazakhstan in December 2015, we bought SIM cards for a prepaid AT&T plan for our phones.  AT&T worked reasonably well while we were in North Carolina, but didn't work very well most of the places we go in Maryland or DC.  I had been reading about Republic Wireless and its low rates, so we decided to take the plunge and try it (we're very happy with it, if anyone is curious!).  The one problem is that to use Republic Wireless, we had to purchase their phones.  We decided to go for it anyway.  We stood to save enough money on our monthly bills that the new phones would pay for themselves in relatively short order.  Besides, Scott's phone wasn't working so well anymore, so maybe it was really time for him to have a new phone.

My phone was still working well, so I thought I might try to sell it to Amazon.  I wasn't expecting to get much money for it, but maybe enough to buy a new book for my Kindle.  The model wasn't listed anywhere.  I tried looking elsewhere on the internet, and encountered a website that told me that they couldn't purchase it, but if I sent it to them, they would recycle it for me.

Bear in mind that this is a three-year-old smart phone that still works.  I remember it wasn't so long ago when smart phones were very expensive.  But the price of new ones has been dropping steadily, so there is little incentive to buy one that is three years old, even if it works well.

I've read a lot over the past couple of years about "fast fashion"--the clothes that may be cute but are shoddily made and often under terrible working conditions.  They often end up in landfills because they become ratty looking very quickly and people often don't want to buy them from domestic thrift shops.  Sometimes they end up in poorer countries, often to the detriment of local textile industries.  I think society is starting to have a problem with fast gadgets, too.  One the one hand, it's nice that they are becoming less expensive because it means greater accessibility.  On the other hand, the low price of new gadgets provides little incentive to keep old gadgets for longer.  Gadget-production has its share of awful working conditions, too.  The Washington Post recently ran excellent articles on the problems of mining cobalt and graphite, both of which are used in lithium-ion batteries.

I wonder how many "old" gadgets end up in landfills.  It seems that if we're going to upgrade our gadgets on such a regular basis, then recycling them should be more convenient.  We have taken old gadgets to Best Buy to recycle in the past, but I would vote for something even more convenient, like having gadget recycling bins near regular recycling bins in residential areas.

For my "old" phone, I did some looking online and found a charitable organization that takes unwanted phones.  If I understand correctly, this organization takes advantage of the emergency call capabilities that are on all cell phones, and distributes the old phones to people who are at high risk of needing to make emergency calls, but cannot afford their own phones/plans.  It turned out that the Whole Foods near me had a bin to collect old phones for this organization, so I managed to get it out of my apartment quickly and easily.  I hope it will be of use to someone and avoid the landfill for at least the next few years.
Posted by Hannah at 7:03 PM 2 comments: