Happy holidays to everyone!  We got back late yesterday evening from spending Christmas in North Carolina with my family.  We started out in my hometown of Chapel Hill, NC, and then went to the coast before heading back to Maryland.  As always, I had a great time.  Here are some pictures of cool things I saw.

Posted by Hannah at 5:19 PM No comments:

We took a walk in DC yesterday to celebrate my first day of winter break.  With all the drama in my work life over the past six months, classes, and grad school applications, I'm very grateful for a chance to catch my breath.

First we visited the Christmas tree on the Capitol lawn.  I'm always fascinated by the scale of ornament needed for such a large tree. 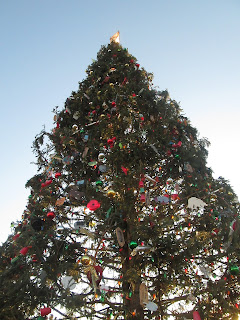 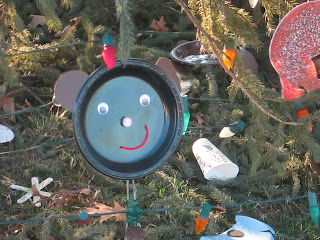 Then we visited the US Botanic Garden (where we experienced the corpse flowers over the summer) to see what sort of holiday decorations they had.  In addition to Christmas trees and poinsettias, they had a display with model trains running past models of various "roadside attractions" found in parts of the US.  Where else can you see Mt. Rushmore and Mr. Potato Head at one time? 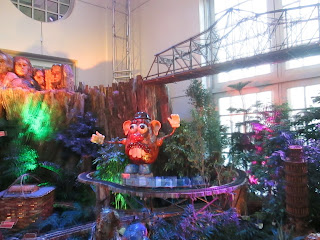 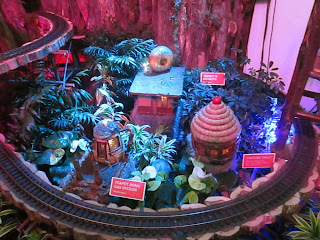 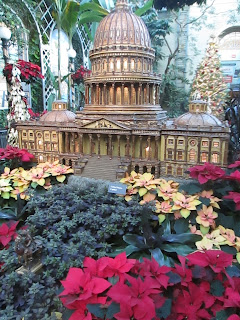 It was also fun seeing DC in the evening.  We got to see the Washington Monument at sunset and the Kennedy Center with rainbow lights.  There is always something nice to see around here, and I'm so glad this area is my home. 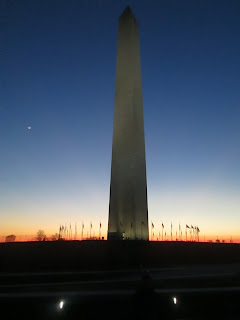 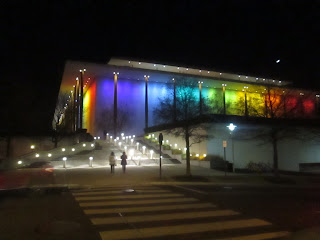 Someone Needs To Pull Her Weight Around Here

Hypothetically, what would you do if you were working from home one day and saw a mouse scuttle across the floor from the kitchen to the coat closet?  What if the member of your household who is responsible for handling such disasters were sound asleep on the couch with her toy mice, paying no attention to the live mouse that was moving about so brazenly?

I hoped Laila would sense something and wake up.  Meanwhile, the mouse kept poking its furry little head out from under the door of the coat closet, and I knew it was just a matter of time before it made a run for it again.

Since watching and waiting wasn't cutting it, I woke Laila up and lured her over to the coat closet with treats.  After she ate her treats, I opened the closet door and put her inside, hoping she'd smell the mouse and be interested.  No such luck.  She backed right out.  I tried a few more times, and eventually gave up and closed the closet door.

I went back to work and Laila got up on my lap.  Out of the corner of my eye, I saw the mouse poke its head out from under the closet door.  I turned in my swivel chair to try to show Laila.  She looked away.

I tried a few more times, but eventually, the mouse scurried back in to the kitchen.  Laila was blissfully oblivious.  And I have to live with the knowledge that there is a mouse loose in the kitchen somewhere.  Ugh.
Posted by Hannah at 2:08 PM No comments:

The End Of A Cheap, Tasty Era...And Maybe The Beginning Of A New One 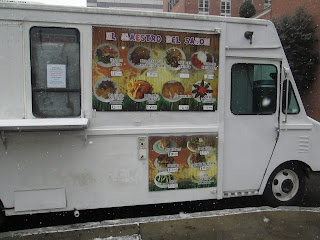 One of the amenities of where we live is proximity to a taco truck.  It's about a five-minute walk from our apartment, and we frequently took advantage.  We referred to it as the taco truck, but it had plenty in addition to tacos, including pupusas, fried chicken, and various platters.  It was a reliably quick and delicious meal.  I particularly enjoyed the tacos because they reminded me of the ones I ate in Mexico when I studied there as an undergrad--marinated meat, onions, and cilantro.

This was a Friday dinner favorite, in particular, when we were always tired and hungry.  I took a few hours of leave on Friday afternoon to work on a class project.  I passed by the taco truck walking home, and was crestfallen to see that it had just closed!

We had been bemoaning the lack of additional taco trucks within an easy walking distance of our apartment.  But then we walked by the taco truck on Saturday and saw a sign on it advertising the grand opening of El Rey Del Sazon.  The sign provided a phone number, but no website or other information.  We're hoping this will be taco truck in the same location.  We've just become too spoiled to go back to our pre-taco truck days.
Posted by Hannah at 4:08 PM No comments:

Life's Little Triumphs: YouTube Solved A Song Mystery For Me

I don't know what other people typically use YouTube for (and maybe in some cases, I'm happier to not find out), but I usually use it to listen to music.  Sometimes I pick a series of songs in succession, but other times I just pick one and then let YouTube select what I hear next.  I've found some great new-to-me (but often decades old) songs this way.  But today when I was listening to music over YouTube, what should I hear but the instrumental section at the beginning of a song I've liked for years but knew neither the title or the artist?!

Tracking down random songs I like has always been a thing for me, and as internet searches have improved, it's become easier.  But I liked this particular song mostly because of the instrumentals, and I never knew a long enough string of lyrics to find it by searching.

Anyway, if anyone is curious, the song in question is "Steppin' Out" by Joe Jackson, and now that I know the lyrics, I like those, in addition to the instrumental section.  Definitely an unqualified triumph.

Unfortunately, I was also dealing with a mysterious anti-triumph today.  In my opinion, certain annoyances belong to certain seasons.  Heatwaves belong in the summer and blizzards belong in the winter.  Along similar lines, bug bites definitely do not belong in the late fall.  Yet, yesterday, I somehow ended up with two very itchy bug bites on my left foot.  The kicker is that yesterday I was wearing tights, thick socks, and boots, so I don't understand how a bug got anywhere near my foot.  All I can conclude is that either (a) I'm having an extremely delayed reaction to bites I got the last time I wore sandals, or (b) the bugs have decisively outsmarted us and we're all in trouble.

Wishing everyone a weekend full of triumphs and free of any out-of-season annoyances!
Posted by Hannah at 7:29 PM No comments: