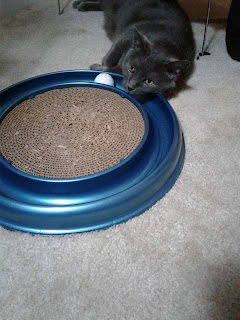 One feature of our current quasi-isolated state is that we're getting lots of time with our cat, Stella!  I think she was excited to have us home for the first couple of days.  Now...not so much.  I think she'd gotten used to a routine in which we were gone for large swaths of the day and she had some cat alone time to do whatever it is that cats do when humans are not rudely interrupting.  Don't get me wrong, she still seeks us out sometimes, but we've noticed that she's spent more time hiding, and we've tried to give her some space.

One thing that I've noticed but can't explain is that she's more vocal and demanding at night.  She's always gotten up on the bed to wake us up, but I feel like the nighttime interruptions have become more frequent.  Also, last night, she decided to pounce on my legs with her claws fully extended...

We got an email from our veterinary clinic the other day.  They're staying open as an essential business, albeit with reduced hours and different procedures.  Until further notice, when we bring an animal in, we're supposed to sit in the car and call them.  Then, a vet tech will come out to retrieve the animal.  At the end of the appointment, the vet will come out with the animal and discuss/answer questions.  We're also supposed to pay over the phone via credit card.

Stella seems pretty healthy, so we're optimistic that we'll be able to avoid vet appointments in the near future (although I think her annual rabies vaccine may be due in May).  But having had relatively recent experience with a sick cat, I know that sometimes vet appointments can become very frequent very quickly.  I'm glad our clinic had thought creatively about ow to stay open while minimizing everyone's exposure to the corona virus.
Posted by Hannah at 12:55 PM No comments:

We went to the supermarket today for the first time since Saturday.  This is also the most contact we've had with other people in several days, which is sad considering we can't even get together with friends right now.  But I digress.

The supermarket wasn't terrible today.  I wasn't as crowded as it sometimes gets during even normal times, which I attribute to some people ordering groceries rather than going into the store.  It was also much better stocked today than it was on Saturday, which I attribute to the store setting limits on the number of certain high-demand items that people could buy.  Many of these items made sense; one of these items was packaged salad greens, however, which makes me think that people who don't make salads regularly don't understand what short shelf life those have.

In spite of the limits on items, some things were in short supply or nowhere to be found.  I did not see a single roll of TP or a single container of disinfecting wipes.  We bought one of the last two boxes of Kleenex on the shelves.  The store was down to its last few jars of peanut butter.

In other cases, the thing that was missing was the less expensive option.  The bulk bins with the ladles are closed due to sanitation concerns, so you couldn't get the bulk nutritional yeast (which we love to put on roasted veggies).  However, you could buy a prepackaged canister of the stuff at a considerable markup.  The least expensive olive oil was long gone; however, there were many "fancier" options still available.  There was no store brand butter on the shelves, but there was still a good supply of the imported European butter.

Ordinarily, I'm not very germophobic, but that has changed due to current circumstances.  When we got home, I disinfected our phones, the pen I was using to cross things off my list, and my house key.  I also threw both of our jackets and all of our reusable bags in the laundry.

We're lucky in a lot of ways.  We're not rich by any means, but if the less expensive item is missing from the supermarket, we can sometimes buy the more expensive option if we need it.  Similarly, we have enough money to be able to buy extra of things we think will be essential to our well being if we get to the point that we can't leave our apartment.  Also, we have a washer and dryer in our apartment, which means we can do laundry whenever we want.  What worries me is some people have very little margin for dealing with even ordinary inconveniences, and something like this pandemic may prove ruinous to them.
Posted by Hannah at 10:13 AM No comments:

Plenty has changed since I last blogged about the covid-19 pandemic.  My gym made the decision to close early on Monday; later in the day, our governor ordered all gyms, movie theaters, bars, and restaurants (except for drive-through, carry-out, and delivery functions) to close.  I'm also staying home from my hospital internship for at least the next couple of weeks.  I'm sad about that, but it was the right decision for everyone involved, and I actually feel less stressed out now that the decision has been made.

So now there will be a lot of time at home.  I have work to do, which I ignored today in favor of cutting out fabric for my next sewing project.  I have plenty of fabric to sew, beads to turn into jewelry, and books to read, so if I can stay healthy, I have a chance of staying reasonably content.

Scott and I are still taking long walks outside; we feel that there isn't too much risk in that since we're not getting very close to other people.  Plus, it's important to try to maintain our  baseline level of health.  My gym has promised to post workouts we can do at home, and I'll plan to do some of those exercises, too.

Wishing everyone good health and at least a tolerable stay at home!
Posted by Hannah at 5:08 PM No comments:

I'll admit I've been feeling a little uninspired to blog lately.  I just feel like there hasn't been much material because life has mostly been a cycle of classes, internship, household chores, and angst about looking for work.  If there is anything the covid-19 outbreak has brought us, however, it's a departure from the routine.  I've decided to write about pandemic life, not because I expect our situation to be particularly special or unique, but because this chaotic and uncertain situation is much different from other chaotic and uncertain situations I've experience previously, and I'd like to document at least some of it.

I feel like last week was when everything started to change for us.  Last weekend when we went grocery shopping, I wasn't particularly concerned, and didn't buy more than I normally would.  Then my university announced that classes would move to online after our spring break.  That's when I started to think that life really would be different for a while.  I made two (very uncharacteristic) mid-week grocery store runs and went again yesterday.  Some items had already been picked clean from the shelves.  I'm grateful for the amount of food, cleaning supplies, etc. that I normally keep around, and I'm glad I made two mid-week grocery runs when there was still more selection.

One thing that's been in the news recently is the toilet paper shortage.  I was lucky on that account, as well.  I normally order 24-roll packs from Target, and had already ordered one just in the natural course of things.  By the time I learned that there was a run on toilet paper, I had a large package of it en route to me.

As of now, the school where Scott teaches is closed to both teachers and students for two weeks.  It will be closed for students for two additional weeks after that, during which time I suspect they'll have online classes, although that hasn't been made clear.  One feature of having had only one snow day this year is that there is more flexibility for the schools to just give everyone some time off.

My university has decided that classes will be online through early May.  I have an internship (at a hospital!) for the clinical part of my requirements.  As of now, I'll still be going there, but I have a feeling that will probably change.  It'll be disappointing if I have to end the internship early, but I realize the pandemic has brought all sorts of disappointments, on top of the tragedy of so many people dying.

We've been trying to live a fairly normal life until we can't.  We took a long walk this afternoon.  The gym I joined this winter is still open (albeit with some additional precautions).  Assuming it's still open tomorrow, I'm planning to go get a workout.  I have a feeling we might all be spending a lot of time at home in the near future, but I haven't wanted to settle into that prematurely.
Posted by Hannah at 5:09 PM No comments: