Our next day in Uzbekistan, we had an early morning flight to Nukus.  The flight was blessedly uneventful, although the plane shook pretty violently before take-off.  Our purpose of traveling to Nukus was to visit a very interesting art museum that was the subject of the documentary "The Desert of Forbidden Art".  A brief history of this museum is that Stalin outlawed modern art, and as a result, a large number of works by artists of that time were not publicly displayed.  A man named Igor Savitsky saved thousands of these works by persuading the artists' families to entrust them to him.  He then opened a museum in Nukus to house them.  The cost for taking photos there was quite high, so I don't have any pictures from there, but it was a very interesting experience to visit it.

After visiting Nukus, we piled into a minibus to go to Khiva, one of the Silk Road cities with well-preserved/restored architecture.  Driving through the desert, we saw a number of camels.  I still get a kick out of seeing them, even though I saw quite a few when I lived in the Middle East. 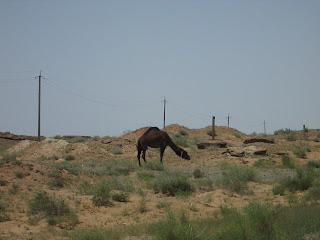 We stayed inside the old city walls.  The place where we stayed was run by a family who lived in part of the building. 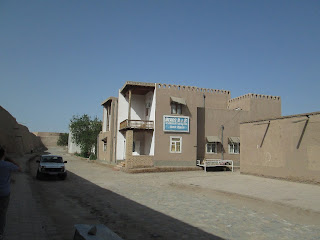 We decided to wait to have lunch until we reached Khiva, so our first order of business was to eat (and drink lots of water--it was really hot there!).  After a leisurely lunch, we had some time to explore.  It gradually got cooler outside as it got later in the afternoon. 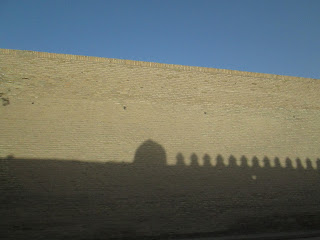 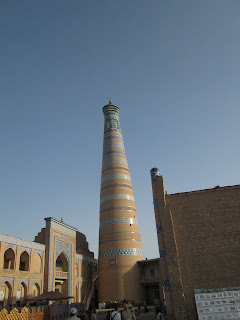 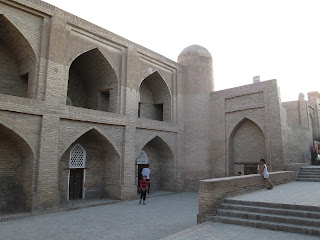 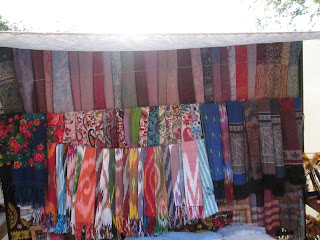 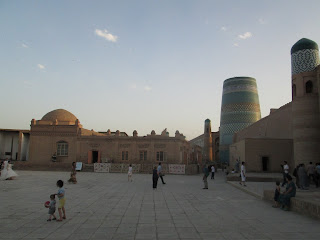 Because of the heat and our late, large lunch, nobody was in a rush to have a huge restaurant dinner.  Scott and one of our friends went out in search of take-out shashlyk (like shish kebabs), so that people could have something to eat, but not commit to a large plate full of food.  We ate our late meal on the roof of our hotel.  At that point, it was dark outside and considerably cooler.

We got up fairly early the next day, both to take advantage of the relative cool of the morning and because we had a long drive to Bukhara ahead of us.  One nice thing we saw was a lot of local families touring Khiva.  There were lots of very cute little girls in frilly dresses and seemingly incongruous shaved heads.  I asked our friend who had spent a lot of time in Uzbekistan about that.  He told me that a lot of families shave their daughters' heads when they're little with the idea that their hair will grow back thicker later on. 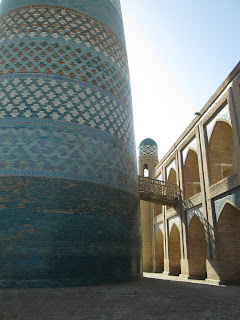 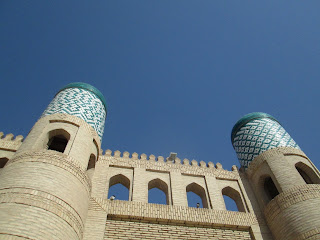 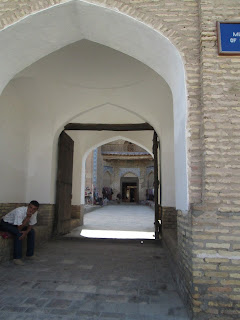 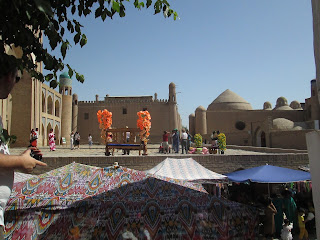 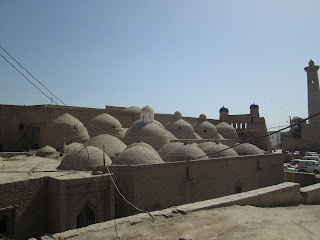 After a morning in Khiva, we piled into another (somewhat larger and better air conditioned) minibus to head to Bukhara.  This was also our first encounter with the driver we had for most of the rest of our trip, who I came to like and appreciate tremendously, though I could barely communicate with him...
Posted by Hannah at 7:06 PM

Email ThisBlogThis!Share to TwitterShare to FacebookShare to Pinterest
Labels: Uzbekistan